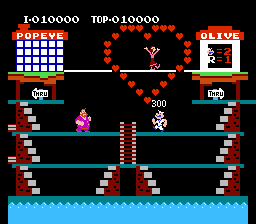 The “Arcade Series”: lonely shmuck collecting points for no reason whatsoever. It’s like looking into a mirror!

Suck on that, Bluto!

Olive Oyl might be the most obnoxious damsel-in-distress ever. She’s loud, she’s rail-thin, and she’s ugly. Any one – heck, maybe even two – of these qualities would be forgivable, but put all three together and I don’t understand why Popeye ever bothered eating gobs of canned spinach, just to save her time and time again. In Nintendo’s Popeye, Olive Oyl is mercifully silent, but she still needs rescuing from the sweaty grasp of Bluto.
In each of the game’s three stages, Olive Oyl will throw down an item: hearts, musical notes, and the letters to the word ‘HELP.’ To save her, you must collect all of the items she throws down while avoiding Bluto. Bluto isn’t very smart, but he is crafty. Each stage has three different layers/platforms that Popeye and Bluto can both descend or ascend. If you’re on the same platform as Bluto for too long, he’ll start throwing bottles at you. Also, if you are directly under him, he’ll jump on you when you least expect it, killing you instantly If above, he can knock the ground under you, also killing you instantly. There is one unit of spinach for Popeye to eat in each round. Eat it, turn purple, and pound Bluto for an extra 3,000 points. Unfortunately, he comes back. Each of the three main stages are well-designed, but once you hit Stage 4, the stages repeat albeit with slightly extra challenge. Unless you’re a point warrior who likes to collect points like the young’uns collect Achievements, there’s no reason to continue playing Popeye. The levels grow tedious and Olive Oyl isn’t really a figure I enjoy rescuing. Popeye definitely sits with Nintendo’s lesser works, like Donkey Kong 3 or Clu Clu Land; not terrible, but curious.
C-
The following two tabs change content below.