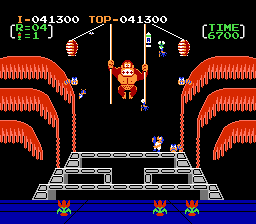 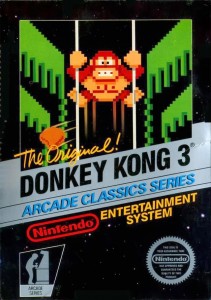 Thank God this is the “original” Donkey Kong 3 and not some Chinese ripoff.

Very few people have played this particular entry in the original Donkey Kong series and it’s often seen as the black sheep of the original trilogy. Said haters should go and replay all three Kong entries back to back. Donkey Kong 3 is more of a button masher than the first two, but the replay value for it far exceeds Donkey Kong and Donkey Kong Jr. You play as Stanley the Bugman, in his first and only starring role, and your purpose is to push Donkey Kong back up his vines and off the screen where he belongs. Bugs will also come and attack you, and also try to take your flowers at the bottom of the screen. Your flowers will give you extra points once the level is done, so you want to protect them WITH YOUR LIFE. Hit the bugs and Donkey Kong with some bug juice to beat each level. It’s simple, fast-paced fun. Much like the first two, the levels repeat, but the arcade style of Donkey Kong 3 lends itself well to this. I definitely don’t mind replaying these levels as much as I did in the first two games. Different harder enemies emerge the further you get into the game. Your only real power-up is an add-on that turns your bug spray into mustard gas, and Donkey Kong and the bugs really hate that.
As far as gameplay or overall gaming impact, Donkey Kong 3 contributed very little. It came out in 1984, the year of the Video Game Crash. As a result, it wasn’t nearly as popular as the first two, and those that did play it, didn’t think much of it. Still, time has been kinder to this entry than to its older brothers. Donkey Kong and Donkey Kong Jr may have been more groundbreaking, but Donkey Kong 3 is arguably more fun.
B
The following two tabs change content below.