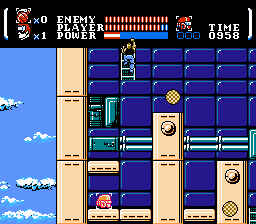 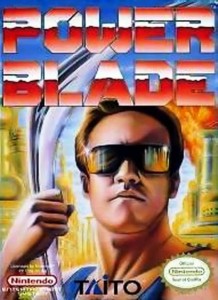 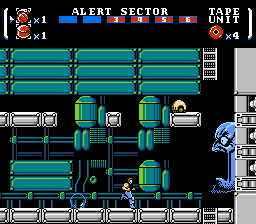 Level 3 springs this horrible surprise on you without warning.

Are you powerful enough to wield the almighty Power Blade?! Even if you think you can, tough luck! Only one man, the 22ndCentury Warrior, has the proper mindset to even think about handling the Power Blade. And handle he does, in six action-packed, hard-charging levels, full of pith and vinegar. Question: what would you do if you were armed with a Power Blade? “Destroy everything in sight,” is the only acceptable answer, as this is the Warrior’s mission. As the Warrior destroys, the enemies drop upgrades like extra killing power or multiplied blades (three at once!). Much like a shoot-em-up with weapon/ship upgrades, the more his Blade is charged (gaze at the Power Meter at the top of the screen to see how strong it is and how far it can shoot out), the easier of a time he’ll have. Later levels expect him to have a charged Power Blade, so if he doesn’t, just start over from a previous level and save him some grief. He can also use grenades if his Power Blade doesn’t get the death done. The coolest upgrade, however, comes in the Warrior’s complete robot transformation. Find the robot helmet located in random areas to transform and go nuts, but don’t get too comfortable. Three hits shrinks him back down to regular Warrior status. One excellent feature not found in many (if any) 8-bit action games: when the Warrior gets hit, he doesn’t fly backwards like Mega Man or Simon Belmont. This is a tremendous help later on when he’s bouncing from platform to platform and enemies are shooting or flying directly at him. As an action title, Power Blade doesn’t have the unbridled creativity of Bionic Commando, but it’s fast-paced, difficult, and rewarding. An overlooked gem.
B+
The following two tabs change content below.