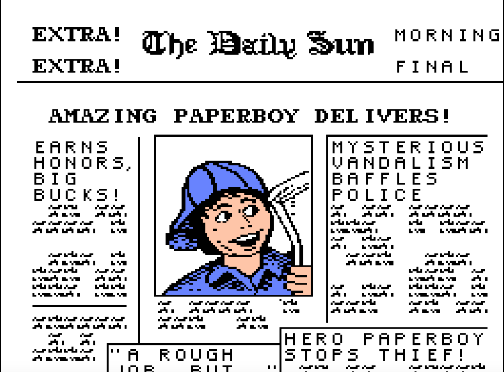 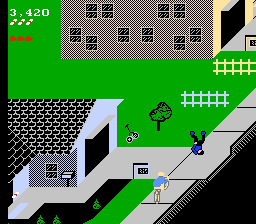 Bro, face it, those pants are never going up.

I’ve never personally bicycled through a neighborhood at four in the morning, groggily hucking papers at doors. If Paperboy is realistic in any way, I’m glad I avoided the profession. Annoying dogs, skateboarders, dudes desperately trying to pull up their pants on the sidewalk, renegade lawnmowers, tornadoes, and the Grim Reaper are just a few of the characters trying to prevent your daily paper delivery.
Your goal is simple, true, and American: throw papers at subscribing houses. Throwing papers sounds easy enough, but many of the houses sit at angles where chucking them head-on will not suffice. Curve those buggers! Slow down, speed up, do what you need to do, just don’t piss them off by not delivering their paper. You’ll know your subscribers by their house colors of white, blue, and yellow. Red houses are not your subscribers nor are they anyone you want to associate with; they’re the eerie neighbors that are most likely hiding bodies in their basements. Feel free to break their windows or dump over their trashcans for points.
Should you succeed in delivering a paper to every house, you will be “rewarded” with a new subscriber, a former red house seeking to repent of its body-collecting ways. It will take a lot of paperboy skillz to keep all your customers and gain new ones, but if you lose them, don’t fret. You can still beat the game with only one customer (although your fellow paperboys won’t think much of you, I’m sure). There’s also a random training stage at the end where you can hone your paper chucking and bicycle control. Get to the end of the stage and three bored people will cheer you for your efforts! Make it through a road-rash filled week of nightmares and your name will be forever emblazoned at the Daily Star. Paperboy may not entertain as much as the Sunday comics, but it’s a solid arcade translation that doesn’t skimp on the insane.
B
The following two tabs change content below.