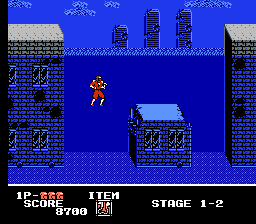 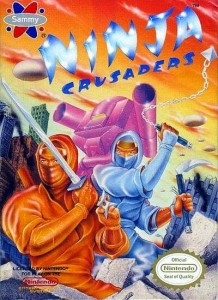 Well, I can see why nobody bothered to give this game a test drive, back in the Blockbuster era. Compared to Ryu Hayabusa’s rugged good looks, these ninjas are quite fugly.

Crusaders for the Ninja Way are few and far between in our modern society, but thank God Sammy knuckled down twenty years ago and produced a tribute to them with the quirky Ninja Crusaders. In this particular title, you as the Ninja Crusader, must save the entire Planet Earth from conquering aliens. The aliens are out for blood, and you’re a relatively weak vessel. Be prepared for a number of one-hit kills, and towards the middle of the game, an almost dizzying onslaught of enemies. Make wise use of the four weapons the game provides, then, as all of them have their strengths and weaknesses. Shuriken are your starting weapon; they’re weak, but have long range. The whip was my personal favorite. It has excellent range, and is slightly stronger than the shuriken. The bo and the sword are both strong, but short on range. Given that your stalwart Crusader only takes one hit before death, I strongly recommend longer range weapons. It might take a few more hits to kill the stronger enemies, but it’s worth it. Also, two-player co-op that works! Games should always be praised for such a feature.
I try not to write game comparisons anymore. It’s a cop-out to just explaining the game on its own terms. That being said, Ninja Crusaders really is the bastard child of a torrid one-night stand between Contra and Ninja Gaiden. It combines obvious traits from both parents, while lacking the polish that made its parents successful. But hey! Just because Ninja Crusaders isn’t as loved as those triple-A titles doesn’t mean it lacks merit. Its non-stop action livened up my rainy afternoon, and I love it for that.
B
The following two tabs change content below.