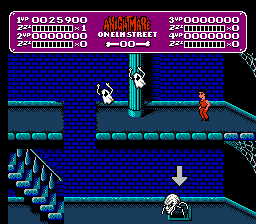 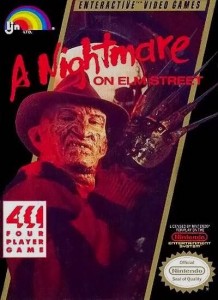 Four score and seven meltings ago, Freddy was just a humble school janitor, living the dream. 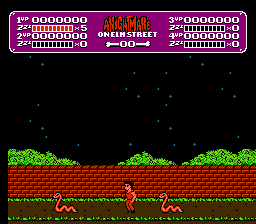 Snakes are no match for your red jumpsuit. HIKEEBA!

I’ve given decent scores to Dr. Jekyll and Mr. Hyde and Friday the 13th, despite the fact that neither of them are great games, and I was fully prepared to find the worth in Nightmare on Elm Street. Unfortunately, it’s another LJN-produced disaster, but let’s hold it right there. LJN takes a lot of crap, and sometimes deservedly so, but they did not develop Nightmare on Elm Street or the majority of their greasy rainbow-stamped games. LJN is only a publisher. Let that seep into your mind because many retro gamers (including myself in the past) have missed that point. Other companies developed all of those shoulda-been classics, like Back to the Future, Who Framed Roger Rabbit, and Alien 3, among so many others. Nightmare on Elm Street in particular was developed by Rare, of Donkey Kong Country fame. Given their pedigree, I would have expected a game of a higher caliber, but then again, it’s Nightmare on Elm Street, a licensed game based on a sometimes-good, sometimes-cruddy horror series. What do people actually expect from it?
If I was a “Nightmare on Elm Street” fan, I would have expected to play out different stages or “scenes” from the movies. I would have wanted to fight (more) different forms of Freddy. I would have hoped the game be a love letter to the series. Instead, it’s an ambitious, but deeply flawed mishmash of random ideas. Four-player simultaneous capability? Sure! Play a Normal Teen, an Acrobat, a Shadow Warrior or a… Necromancer? It’s an intriguing idea, but it doesn’t work. Imagine New Super Mario Bros. Wii, but on a system like the NES, with its already famous penchant for slowdown. Another strange idea is the sleep meter. The sleep meter descends on its own, and when it depletes altogether, you enter the Dream World. Enemies are harder and take “scarier” forms, but it’s not like Simon’s Quest where you’ll be cursing the dark as you attempt to fight. The sleep meter actually ties the game to the films, and while it too doesn’t really have much of a purpose, it feels appropriate.
Going into houses and collecting the bones of Freddy is your main task. The bones like to blend into the environments, but that didn’t bother me much. What is frustrating is the slippery controls. All of the areas, whether you’re outside in the graveyard or inside in a house, feel like they’re covered in wax paper. Even worse is the Normal Teen’s punch (if you’re rockin’ first player as I did, you’re limited to choosing the Normal Teen). Its range is so limited and its strength so weak that I wondered why he even had an attack at all. Entering houses is also a gamble. Shouldn’t I be able to walk in front of an open door, push up, and have the teen enter the house? It’s how you advance the game! In the end, the latter is the game’s biggest flaw. Any game that hinders you from progressing, inadvertently or not, deserves more time in the Crockpot. Nightmare on Elm Street is a half-baked ham.
D
The following two tabs change content below.