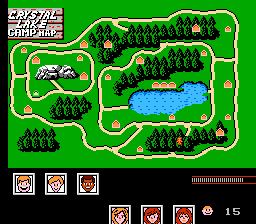 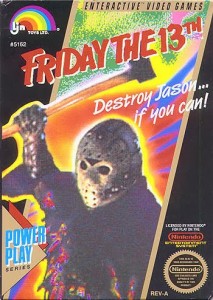 Jason and his amazing Technicolor DreamHatchet! 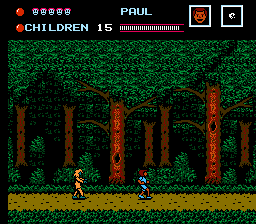 This looks promising! Better hide out in the woods for awhile.

LJN games sure do try hard, don’t they? Any other publisher would have probably tried to make Friday the 13th into an straightforward side-scrolling action game. Jason would have chased you at parts, but a true fight would have come only at the end. You would have killed Jason only to find that *gasp* he wasn’t the final boss! Jason’s mother would be the last Incarnation and her true form would be something similar to the Alien Queen! How sweet would that have been? Only LJN would encourage Atlus to add puzzle elements, fetch quests, and a vague sense of progression. Goals range from collecting weapons to fighting Jason (or his mother’s severed head), lighting fireplaces, collecting children, fighting Jason some more, and trying not to die. The environments – the whole game takes place in a campground, natch – are repeated throughout the entire game. The enemies are all mindless zombies, except for Jason who is a mindless powerhouse that can overtake you constantly. Truthfully, thanks to the brilliant minds at Atlus (can you imagine Beam Software ruining this game? Doesn’t take much) Friday the 13th isn’t awful. It’s cryptic. One can get lost in the repeating environments and it’s incredibly hard not to die when Jason comes on screen. Even the walkthroughs over at GameFAQS don’t help that much. If you have patience for death, death, and exploring what appears to be the same place over and over again, Friday the 13th may reward you… and I feel a little dirty saying that.
B-
The following two tabs change content below.