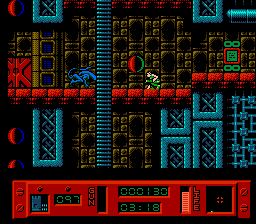 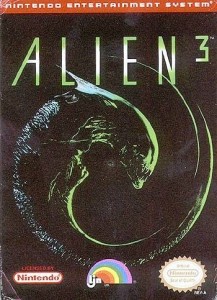 Beware the rainbow of doom on an otherwise awesome cover box. 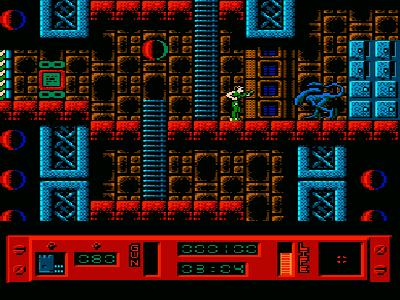 That’s 3 minutes and 4 seconds you could use to turn off the game.

If there are three letters that haunt every God-fearing Nintendo player, it’s “L,” “J,” and “N.” No other company in the history of the Nintendo has released such a long line of atrocious games that are barely playable. It’s a shame that they managed to nab some of the more interesting franchises to come out during the NES: “Roger Rabbit,” “X-Men,” “Back to the Future,” and “Spiderman” are just a fraction of the games in their canon. Alien 3 for the NES is another casualty, a potentially atmospheric, action-packed title rendered into boring shovelware.

Alien 3 has Ripley rescuing prisoners in eight similar levels. Along the way, you (Ripley) have to watch out for Ali3ns (couldn’t help it) and the clock. Yes, each level is timed, and you must gather all the prisoners AND make it out of the relatively large and confusing levels before time runs out. This wouldn’t be so bad if the time was set at, say, five-to-eight minutes depending on the size of the level. Instead, the most you’ll ever get is five minutes on some of the bigger levels. The problem with this is not that you have to run through the level, but that you have to get a pretty perfect playthrough to actually beat the level – no dillydallying for extra goods, and no falling off of ladders. The prisoners are strangely placed too. You’ll go a couple minutes without seeing one before finding two in one area. Thankfully, this is not a one-hit kill game, and you do typically have plenty of ammo for your two guns. One frustrating part about the aliens, though, is that when they pounce on you, they take away a decent chunk of your ammo. I don’t remember that crap happening in the movie! Then again, I don’t remember Ripley resembling a bald white monkey either… 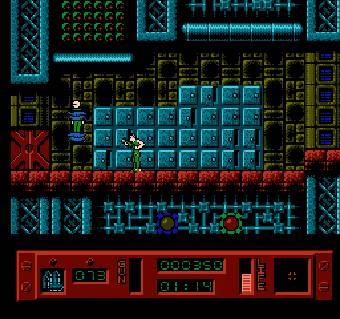 This game was the biggest disappointment since the film “Alien 3.”

Here’s the thing about an Alien game: no player wants to rescue prisoners. They want to sneak around, shoot aliens, and be enveloped in moody atmosphere. If prisoner-rescuing must be an element, then it should be a minor one. And for the love of everything, why the timer? I understand it adds the only difficulty to be found in the game (boss battles are a joke), but it could have been improved or simply excised. In the end, though, why bother complaining about an LJN-produced game? Every gamer knows the majority of their published games are terrible, so I’m preaching to the choir. This review is for the curious, then; the ones who think, Hmm, perhaps an Alien game on the NES might be fun. Disregard those thoughts and turn back, all ye who ponder.