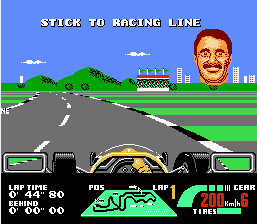 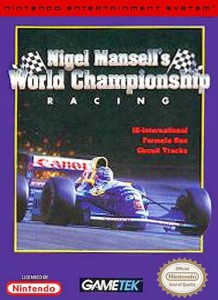 That red blurb is what text looks like when you read it at 200 km/hr. 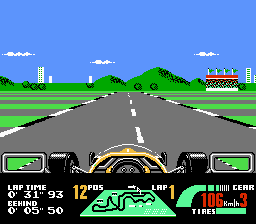 Unsurprisingly, Japan has one of the hardest tracks to complete. You’ll need lots of practice before you succeed here.

I discovered earlier today that, if you’re gonna stick an F1 racer’s visage into a game, you could do worse than Nigel Mansell. My boy Nigel remains (according to your friend and mine, Wikipedia) the most successful British Formula One Racer of all time. He had a fifteen-season career with thirty-one victories, and until 2011, the most number of poles set in a single season, along with a number of other accolades easily discovered on the Internet. Thank the Royal Crown, then, that we can add a solid racing game on top of a long and storied career. World Championship Racing straddles the line of sim and arcade racer quite wonderfully. Before each race, you have the option to change between transmissions, tires, and spoilers, and during the race, you should probably switch out your tires at least once in the pit, but apart from these elements, WCR keeps you racing without worrying about the intricacies. There’s sixteen tracks to choose from, with each one taking place in a different country. Not surprisingly, the game replicates the 1992 Formula One season, which Nigel Mansell won. You can even take racing advice from Mansell’s bloated disembodied head, if you need to practice any of the tracks. He spouts things even I know, like “Don’t hit the barrels!”, “Straddle the racing line,” and “Straddle the racing line” (I’m not sure if I’m that bad or if it’s just one of his favorite things to say – I’ll ask him next time). Because World Championship Racing came out in late 1993 for the NES, the game’s all but ignored, but it shouldn’t be. If you’re a fan of racing games on your NES, rejoice. This is one of the few keepers.
B
The following two tabs change content below.