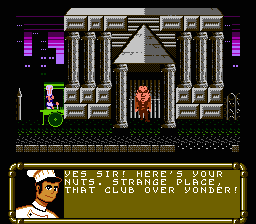 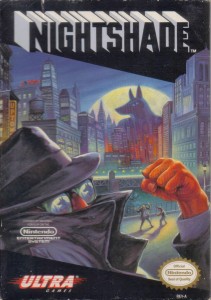 Every character is uniquely designed. It’s a nice break from the never-ending clones that typically populate games.*

Despite taking its name from a toxic flower, Nightshade truly is a breath of fresh air in the NES library. It’s a point-and-click adventure game, with an overly-humorous tone akin to the Monkey Island series. Basic plot: Nightshade a.k.a. Mark Grey is a detective/vigilante trying to take down Sutekh, an Anubis creature, and other crime lords of Metro City, one clue at a time. Like any other point-and-click adventure, the game’s non-linear, with quite a few sidequests to occupy your time. Metro City feels overwhelming at first, but the more you wander around, the more you get accustomed to its back alleys; still, probably wouldn’t hurt to make a map. In addition to looking for clues, Nightshade can fight people and creatures. The fight sequences don’t control perfectly, but they’re a nice break from just perusing Metro City. Should you “die” in a fight or elsewhere, you’re instantly thrown onto a trap of Sutekh’s. You are able to escape four consecutive traps in a row, if you figure out how to do so. By the fifth trap, it’s game over, and of course, if you fail to stop any of the previous traps, game over, as well. Nightshade isn’t that strong, so it’s a clever way of giving you a few more cracks at the game (especially since there’s no save feature). In addition to his health meter, Nightshade also has a popularity meter, which can be raised or lowered by taking down enemies or doing sidequests for people. The higher your popularity meter, the more the citizens of Metro City will like you and the more access you’ll be granted to private areas. The popularity meter, in particular, feels ahead of its time, like a feature that would be used in today’s modern games. Nightshade is a light-hearted noir with memorable characters, unique features, and an enveloping atmosphere. The Nintendo could have used more games like this.
A-

*thanks to vgmuseum.com for the screenshot.