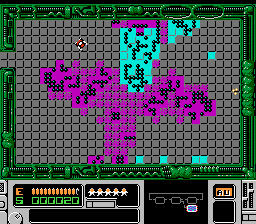 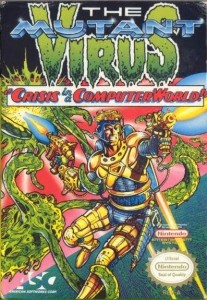 The take-home message from Mutant Virus is that purple always triumphs over light blue.

Mutant Virus is a generic title, isn’t it? I’m assuming that’s why American Softworks shoved the almost-as-dull Crisis in a Computer World on the tail end. Neither one phrase nor the other would be enough to entice people to play the game, but together?… they just make for a long, awkward title to a potentially interesting game. You star as a shrunken-down spaceman, whose goal is to eradicate viruses in a – cha-ching! – computer world. The computer world is a bunch of small tiled rooms, loosely connected by a bunch of science-y-looking stuff. Kraftwerk can’t help you here, though; you’re on your own, beefcake, and if you were honest with yourself, you wouldn’t want it any other way. In order to take down the viruses, you have to spew what appears to be stars at them. The stars turn the tiles blue, and once a part of the virus strain becomes infected, after a couple seconds, the strains stop moving. It’s all very nice and orderly for the first stage – virus gets hit by stars, virus stops moving, onto next room, repeat pattern, wheeeeee! – but the second stage turns up the juice. The viruses begin to mutate and get stronger, and you need to get weapon upgrades in order to harm them at all. Shooting at weaker one-pronged strains supposedly infects the stronger multi-pronged ones, but I found myself getting overrun by the evil much too fast, even with the upgrades. Mutant Virus tries to be different, to mutate into something special that will infect the entire gaming community with rapture. Alas, too much of Mutant Virus will definitely make one sick, or at the very least, bitter and hostile.