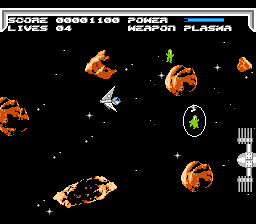 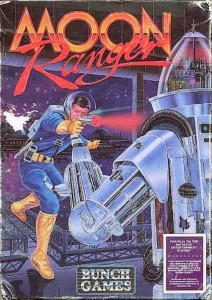 “No deal, McCutchin. That moon money’s mine!”

Ugh… what are those things, space snot? C’mon, America, show some class.

GENRE: Platforming-shmup-racer (not nearly as cool as it should be)

The “Moon Ranger” in question is a pompadoured so-and-so, who vaguely resembles Gaston from “Beauty and the Beast.” My guess is he went into the Moon Ranging business, not for the glory of exploration, but to conquer the moon and bed vibrant alien women. Well, if he wants any chance at the latter, he’ll have to work a lot harder than he does in the game. Moon Ranger thrusts our titular hero into a shmup setting, a platformer setting, and towards the end of the game, a driving setting (moon buggies, ho!). None of these scenarios work, thanks to the outrageously slow pace and groggy controls. When Moon Ranger Esq. is in his flying space carton, he can’t fire faster than one mile-per-hour. At first, this doesn’t seem like an issue, since enemies are sparse. But once the enemies start taking more than one hit to kill, they can advance on you and deplete your health rapidly. There are weapon “upgrades,” but they fail to inflict more damage, rendering them all but useless. Once Moon Ranger lands on the ground and starts exploring, you get a taste of his all-around dopiness. The space stations themselves are poorly designed, and his body is huge and stiff, so when he jumps, it can be easy to narrowly miss a platform and fall into a bed of spikes (spikes on a space station? Did the builders expect Moon Rangers like him to come along and steal their equipment?); it doesn’t help that the jump button is ‘B.’ I was never able to drive the moon buggy (that’s all the way up in stage 6 – no thanks!), but given the other two laborious sections, the controls are probably slow and unwieldy, and the gameplay perfunctory at best. If nothing else, Moon Ranger is consistent in its crappiness. Just in case you were wondering, yes, this is an unlicensed game. I’d like to think even Nintendo wouldn’t have signed off on this moon pie. 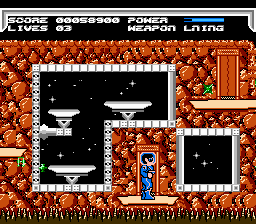 Either the Moon Ranger is ten feet tall, or this is the space station of the Lollipop Guild.