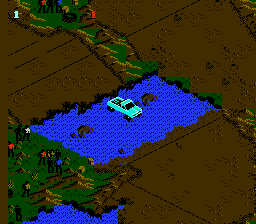 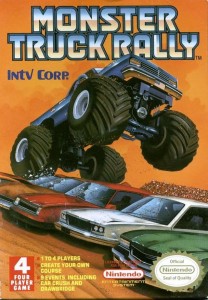 This event is called the Bog. It’s aptly named.

Monster Truck Rally promises hi-octane fury with all the big tires, crushed cars, and overblown testosterone that you can handle. Sadly, it delivers little more than the image of a hipster-driven Geo Metro pleading its way up a hill. For starters, the trucks provided look like little more than slightly lifted Toyotas (this game was released before the “compensator truck” became a popular practice in society) and they drive so slow. Even when you begin to get the hang of switching gears, the computer is almost always leagues ahead of you, even in the lower difficulty settings. There are a variety of modes, in case your mud lust can’t be quenched, but many of them are perfunctory at best. Hill Climb, Donut, and Drag Race are just like they sound, and absolutely boring. Car Crush, Draw Bridge, and Combo Course fare a bit better; the latter throws in every single mode combined into one course. Heck, create a few more varied courses like the Combo, switch up the poop-brown backgrounds (why do the cameramen look like migrant workers? Am I crazy?) for some prettier colors, add some speed to the trucks, and Monster Truck Rally could almost be a racing game! One notable feature: the Custom Track. After slogging through all the game wants you to do, it’s slightly more enjoyable to create your own slog. Since the game’s compatible with up to four players, it might be nice to gather a few friends and see who can drive the slowest. I have a feeling it will be a close race.