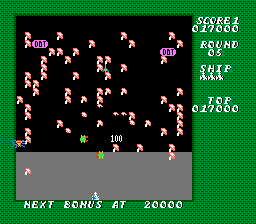 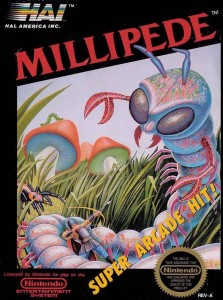 “Thrust that arrow straight between his eyes, I did! And the bugger still ate me!”

It’s a menagerie of what-have-you.

Millipede is one of those “before-my-time” romps that I’ve never been able to get into. You inhabit a young warrior seeking to destroy any and all bugs that roam in dark wastelands, particularly the multi-segmented nightmares known as Millipedes. Unfortunately, you’re given a very limited space in which to destroy them. Three quarters of the on-screen action take place in the dark, while your warriors space is gray and small. Mushrooms are scattered around by the dozens, and you’ll have to shoot through them in order to destroy the millipede and advance to the next level. For added fun, when you shoot the different segments of the millipede, they turn into mushrooms themselves. Sunrise, sunset, I suppose. In the meantime, spiders and other creepy crawlies emerge from the forest, begging for your weapon’s attention. There are DDT bombs you can shoot to blow up segments of the millipede, but since the millipede moves like greased lightning, it can be a gamble. The action is incredibly fast-paced, so much so that it’s impossible to catch your breath. After you destroy the millipede on one stage, the game changes the color palette and you’re suddenly on the next stage, shooting up another millipede. But most old games are about points, right? In that sense, Millipede succeeds as a quarter-robbing time-stealer. Just don’t go looking for any more than that. 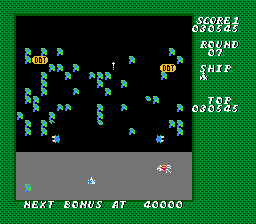 I don’t get it. Why doesn’t the archer just leave this place? Surely there’s a bug-free environment somewhere on earth.