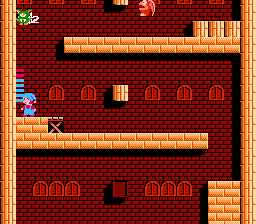 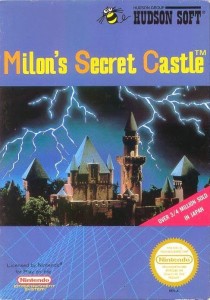 Over 3/4 of a million disappointed Japanese children. 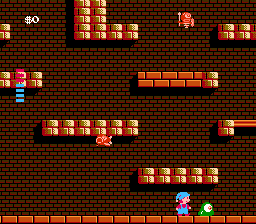 This, Milon, is an alien. Blow a bubble on him and he will get out of your way.

I was entirely prepared to hate Milon’s Secret Castle, so imagine my lack of surprise when I completely, utterly loathed it. The premise is interesting – young kid explores castle and has to search for secret stuff in order to find princess – but the execution trips over itself, like so many young children playing tug of war.
You play as a runny-nosed pip named Milon. His goal is to rescue a princess, though I’m not sure how he plans on accomplishing that with a blankie and a bubble gun. Forget the princess or Milon’s young age: the game is all about the castle and the secrets contained therein. Here are just some of the secrets waiting to be uncovered, and if I’m ruining it for you, well, you’re about twenty-five years too late. 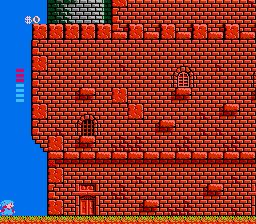 Run, Milon! While you still can!
SECRET #1: wonky controls.
Milon can’t jump for squat, which kinda makes sense cause he’s a toddler. Unfortunately, the castle will have you jumping all over the place. Get used to his half-assed leap. Also, his bubble shot. Unless you press diagonally down on the D-pad, you will always shoot upwards at an angle. Why upwards? Why not give Milon full control?
SECRET #2: confusing castle layout.
I wouldn’t call this a puzzle game, per say, because there are no real puzzles. The castle layout itself, however, can be troubling, even when you realize that it behooves you to shoot your bubbles at ANYTHING. This leads me to…
SECRET #3: you have to shoot every square in every room to see if some important item could be lingering there.
Ok, maybe not every square, but if you’re stuck and don’t know how to progress, that’s exactly what you’ll be doing. The key to obtaining the items you need to progress are contained within the unmarked thousands of bricks in the castle. Have fun shooting.
SECRET #4: Once you enter a room, you have to find the exit because there’s no going back.
Secret #4 isn’t really a secret because, if you read about Secrets #2 and 3, you know why this would be annoying. If you’re stuck in a room, you can’t go back and collect your bearings. You can’t see if you accidentally entered the wrong room. You either deduce a way out or you die.
SECRET #5: One life and you’re dead.
Secret #5 isn’t really a secret either. Lots of games pull this BS, and they’re usually the games that take the longest to get ahead. Thankfully, there’s a continue code (when you die, hold left on the D-pad and press Start after getting the first crystal), but why couldn’t Hudson Soft have just shoved a few continues or extra lives in there to begin with?

Milon contemplates bashing his head against a wall.
Five secrets have I told, none are silver, all are gold. Hopefully this hidden knowledge will prevent you from exploring this willfully obtuse castle. Fun fact/digression: Milon’s Secret Castle is the type of game that people on the Internet will defend with the claim that, “It’s really not that bad.” This is because MSC is such a unique and weird game. I’m not sure I’d call it a cult hit, but strange games seem to come with a fan base who decide that they love them, regardless of any obvious debilitating flaws. Perhaps the people who make this “not-so-bad” claim actually believe it. I’m not here to belittle opinions, but I do believe that Milon’s Secret Castle should have been a better, more thoughtfully designed game. Milon as a character may not deserve better than his pre-programmed fate, but gamers do.
D-
The following two tabs change content below.