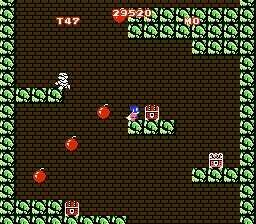 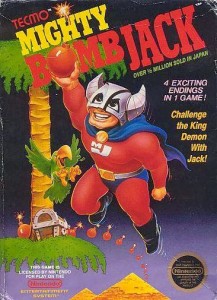 There can be… ONLY ONE! 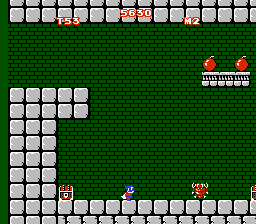 Mighty Bomb Jack has you collecting bombs, transforming into different colors to open treasure chests, and all to combat the demon Beezelbut (they should have just added an extra ‘t’ at the end, right?). For a game that tries to convince you that you’re doing a lot, it doesn’t seem like you’re really doing much of anything. It’s not necessary to collect bombs, unless you want to rack up a phat high score, and the treasure chests contain either points or items like Mighty Coins or Mighty Drinks. Mighty Drinks add more time to your clock, while Mighty Coins allow you to change colors to open more treasure chests to… gain more points? It might seem like you can just fly through the game, but there’s a little more to it than that. While it’s true that the treasure chests contain mostly points, there are special items you can collect in order to achieve the “good” ending. In particular, collecting two crystal balls and 5 S coins will open up the path to Mighty Bomb Jack enlightenment. Another random point of interest: if you collect too many Mighty Coins, the game will send you into a Torture Room for being greedy. Once there, you have to jump up and down fifty times in order to leave, while enemies swarm all around you. And speaking of enemies, in each level, enemies will randomly appear near you. One hit and you’re dead, three lives and you’re out, no continues. It’s brutal, but expected from games made in 1987.
I’ll give MBJ this: it has original ideas, encapsulated within a lightweight arcade experience. How many platformers can you name that had multiple endings? And punishing you for collecting too many power-ups? Kooky! But the levels are slight and boring, and while amassing items in games can be a joy if incorporated well, that’s really all there is to do here. I know many a gamer who likes to party with Mighty Bomb Jack, but given the option, I’d rather stay home.
C
The following two tabs change content below.