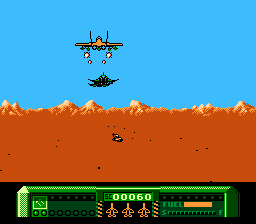 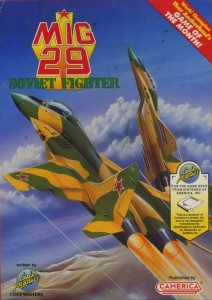 If Thor approves, how can you say no?

Heavy amounts of shrapnel and propaganda went into assembling this game.

Codemasters shows off their programming prowess yet again in this spectacular Communist on-rails shooter. The name MiG 29 Soviet Fighter implies that you play as a bold, ruthless American pilot fighting for freedom against Russian planes and the Red Menace. In fact, you’re a Soviet fighter pilot and each mission has you taking down “terrorists.” Whatever your intentions as pilot may be, it sure is fun shooting down those who threaten Lenin’s handiwork. Planes come in torrents and spit hot fire. The Soviet Fighter takes one hit, and after four lives, you’ll ascend to that great Stalingrad in the sky. In the middle of each level, you ascend above the clouds, and given thirty seconds to attach to the fuel carrier. These portions are surprisingly tranquil and a nice respite from the Cold War hijinx. Beat the boss of each level, and you also have to line up your plane with the landing runway. Don’t land properly and you die, but you still progress to the next level. At six missions, the game’s a wee bit short, but it’s non-stop action the entire time. MiG 29 Soviet Fighter might not be as well known as other flight games on the NES (perhaps naming the game after a Russian plane wasn’t the best idea in 1992), but that shouldn’t stop every America-lovin’, hamburger eatin’, paunchy playboy from trying it.