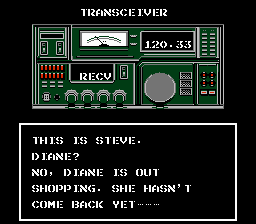 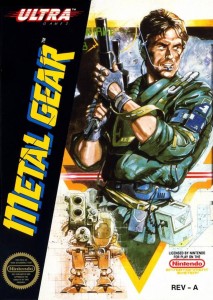 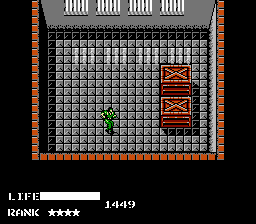 There’s no way to mention the words “Metal Gear” around a dedicated gamer without them busting out their best, over-enunciated Solid Snake impersonation. But before Metal Gear had a Solid attached and before there was voice-acting in games, there was just the original Metal Gear for your Nintendo (actually, Metal Gear for the NES is an inferior port of the original MSX game, but since I’m not reviewing MSX games or going into the history of the series, I suggest you read up on it yourselves).
And it definitely feels like a Metal Gear game for the NES. There’s an emphasis on sneaking around instead of killing everything that moves, a convoluted story, recognizable names and characters, but if you were weaned on the Solid name, as I was, there’s a good chance this game won’t do it for you. Part of the appeal of the Solid series is the banter between the characters, both in the Codec and in the cutscenes, but there’s very little of that here, as one would expect in a limited 8-bit game. When you take away one of the essentials of the “Metal Gear” brand name, you’re left with sneaking around, collecting weapons and items, and killing the occasional guard. This is enjoyable at first, but quickly grows monotonous. The areas you explore may differ, but the gameplay – sneak, collect item/rescue POW, fight boss – is the same old sneak (snake?) and dance. Perhaps my biggest annoyance with this game, though, is that no matter how far you get, you only have one life, and when you die, you always have to start at the very beginning of the game. Yes, you’ll have all the items and weapons and key cards you’ve collected thus far, but still. There’s no reason for such a design choice, and it only increases the amount of time you need to play this long and tedious game. And, let’s face it, you’ll need that extra time perfecting the ultimate gravelly Snake voice! Metal Geeeeeeeeeeeeeeeeeeeaaarrrrrrrrggghhh! But even if you don’t want to do that, Metal Gear still isn’t fun.
C
The following two tabs change content below.