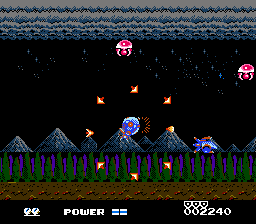 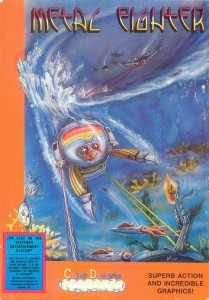 Step right up to Metal Fighter! See the incredible graphics and feel the superb action. You’ll think your eyeballs have squeezed right out of their sockets, or your money back!

All this fighting amongst metal… there has to be a better way!

Sachen, the Chinese developer who brought the world Master Chu and the Drunkard Hu among other oddities, plays by their own rules. Nowhere is this more evident than in Metal Fighter, the shmup that strives to be different. I can understand Sachen’s desire to stand out from the then-overcrowded shooter genre, but devolving it as they do in Metal Fighter is certainly not the way. Three grievances, then.
GRIEVANCE THE FIRST: Your ship starts off walking on the ground, and only after you acquire a flying power-up, can you fly. This would be unique, but Metal Fighter‘s obviously designed to be played off the ground, like any normal shmup (most of the enemies, and thus, the action is in the air). Not only is it a slight inconvenience at the beginning of the stage, but the power-up can almost always be acquired right away by shooting a specific enemy. If it doesn’t take more than a few seconds of game time to acquire said flying power-up, why wouldn’t the ship just begin each stage in flight?
GRIEVANCE THE SECOND: Every shmup worth its salt has a variety of power-ups, and Metal Fighter thankfully does as well. The power-ups range from a double laser shot to a shield that, when fired, protects you from all enemies and even their projectiles. They’re solid upgrades, but you can’t just roll your ship over the power-up to acquire them. You have to enter a challenge section and defeat a replica of your ship. This replica will shoot at you and protect itself with other enemies that are not easily beat. Once you destroy the replica, you’re back in the regular stage, complete with upgrade. It’s unique, but it really takes the player out of the action. Throw in the fact that you can die while trying to acquire your weapon upgrade, and it’s obvious that Sachen was trying to add challenge where it didn’t need to be.
GRIEVANCE THE LAST: Your ship gets three hits before it dies, but there’s usually no way to tell how many times you’ve been hit throughout the level. There were several times I’d be cruising through a stage, thinking I’m doing well, and without warning, my ship exploded. This is partially because the enemy fireballs/projectiles blend into the backgrounds of the stage. Also, when you do get hit, there’s no sound effect to alert you. I think your ship might change color, but only for a brief second.

Metal Fighter‘s not all bad. When you’ve got a good upgrade and enemies are consuming your death blows by the hundreds, it’s a good feeling. But all too often, Metal Fighter feels like it’s over-thinking its shmup status. Perhaps Sachen felt there had to be more to a shmup than simply collecting upgrades and shooting a lot of overbearing, personal space-defying creatures. To which I’d reply, nope, that’s pretty much all there is to it.