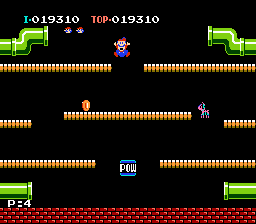 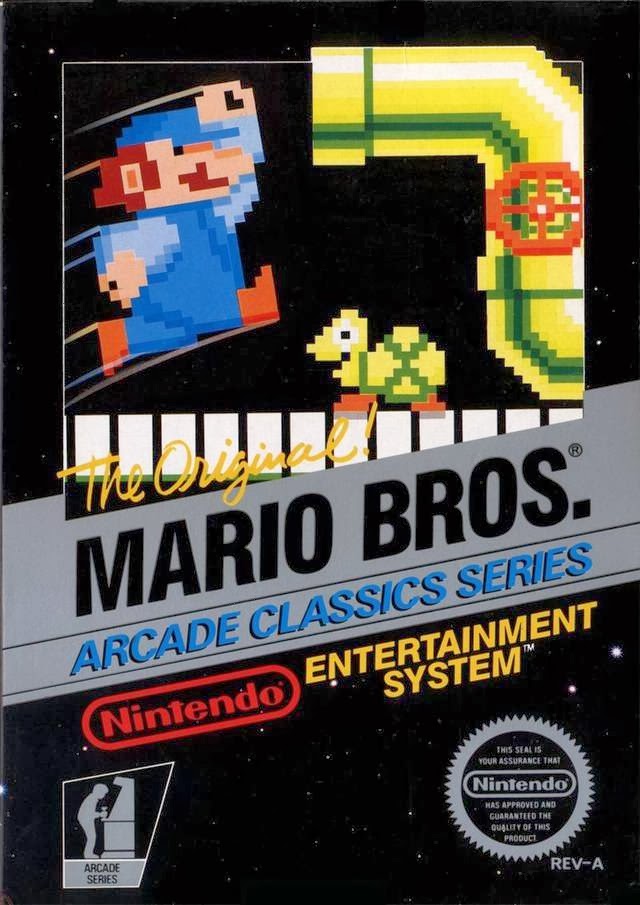 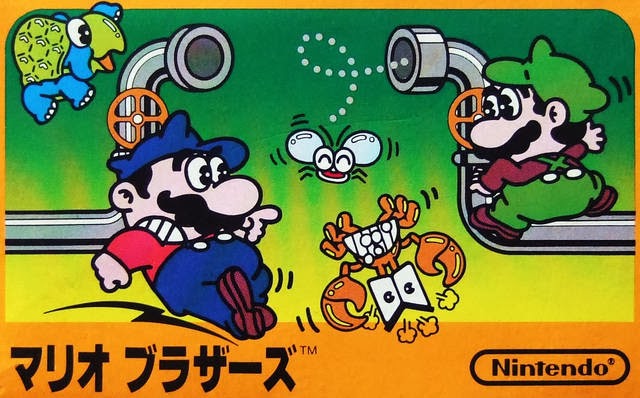 This is more like it. Ah, sweet Famicom covers.

When sewers strike back…

They’re the Mario Brothers, and plumbing’s their game. Certainly in 1983, before there was any mention of Princess Toadstool or the Mushroom Kingdom or Koopa, the Mario Bros. were two regular joes just trying to earn a living, and Mario Bros. reflects just how low-income said living was. Both brothers run around in an underground, pipe-ridden world, stopping turtles, crabs, flies, and ice from gumming up the sewers. The creatures can only be hit from the bottom up. Once hit, they turn over on their back and can be done away with (crabs take two hits – one hit only makes them crazy and demon-possessed). Coins can be collected for points. Fireballs will pop up if you’ve been on a platform for too long. Once you complete eleven stages of pest control, the stages start to repeat ad infinitum. Eventually, Mario and Luigi realize that their lives are meaningless. They could try to keep the sewers pest-free until they die, but it wouldn’t matter because the sewers, by definition, can never be clean. They discuss amongst themselves what actions they could take. Should they enroll at the community college, take some business courses, and try to seek out a better life for themselves? Surely if they could open their own plumbing business after the whole Donkey Kong debacle (thank God the courts didn’t officially recognize him as “Mario”), they could make headway into more lucrative ventures. Real estate, capital investment, international banking – careers where the money would flow as quickly as the five o’clock sewer tide. After twelve grueling hours of head-busting, neck-cracking, blue-collar madness, the Mario Bros. come to a decision. They pick up sewer mushrooms and eat them together. The rest is hallucinatory history.
B-
FUN FACTS ABOUT MARIO BROS.
The following two tabs change content below.