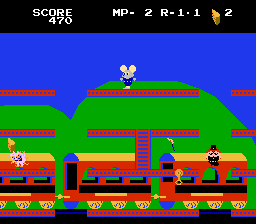 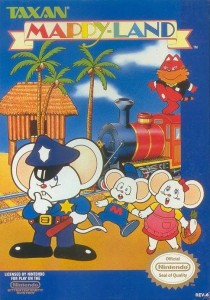 How did a mouse become a police officer in a land overrun with evil cats?

There are almost always four ascending floors like this in each stage.

Mice running away from cats, collecting wedding rings and baseballs, jumping on trampolines (don’t let them turn red and break!) – these are but some of the quirky things happening in Mappy-Land. Mappy the Mouse (hey! That’s you!) runs through eight colorfully themed stages, collecting items and avoiding cats, birds, and other creatures that want a piece of your feisty mouse body. The cats are your main enemies and they are ruthless. The second they see you, they will come for you. Luckily, almost every stage layout is designed to have four floors, thus giving you some room to avoid the cats. To explain further, let’s say the cats are on the fourth floor, close to the top of the stage. Mappy is at the bottom floor. He is still able to see them, but he can collect his cheese, and go about his merry way, while the cats try to make their way down to him. Trampolines and ladders are how you and your enemies get from one floor to the next, but be careful on the tramps. The controls are a little sludgy to begin with, and on the tramps, it can be difficult to jump onto the right level. There are little weapons in each stage that you can use to get rid of or distract the cats, but they’re usually more trouble to acquire than they’re worth, especially on the earlier stages. Once you beat all eight stages and fulfill your girlfriend/wife/whatever Mapico’s desires, you start the stages all over again, this time with a new item to collect. The stages repeat three different times, though the layouts change slightly and become harder the more you progress (the cats, in particular, are faster than you by stage 3-1). Cumbersome controls and repeating stages aside, Mappy-Land is an enjoyable quickie, a ten-minute blast of pure pick-up-and-play arcade quirk.
B-
The following two tabs change content below.