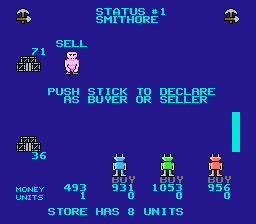 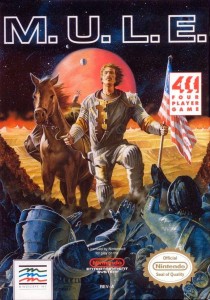 Believe it or not, this is not a Rush cover.

Every so often, a game comes along that makes me stop dead in my questing tracks. Not because the game is good necessarily, but because I’m so overwhelmed by what the game asks me to do (see every Koei game ever made). M.U.L.E. is indeed one of those games. Now instead of simply turning to an FAQ or going to NintendoAge and looking up the manual because it’s 2012 and I do that all the time, I’m going to place myself in the past for this review: as a young man circa 2000, without internet connection. FuncoLand and Software Etc have not yet been gobbled up by GameStop. All types of used games – NES included – are relatively common and easy to find. In this past universe, I approach Funco’s bargain bin and find a game called M.U.L.E. The game has a stupid name and I could really care less, but what the hey, it’s three dollars. I take it home, plug it in, turn it on… my old 15′ Hitachi TV begins to blip different colors. I take the game out, blow on it, blow in the system, put the cartridge back on. It turns on! This screen appears. 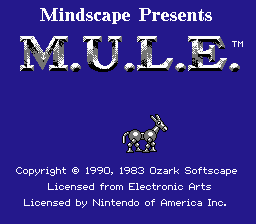 So I have no idea what I’m doing. Let’s begin. The game asks me to pick from 1-4 players (1 player because I’m a reckless loner), Beginner, Standard, or Tournament (Standard because I’m not a wuss), and from a group of seven alien creatures or a human. I pick a Bonzoid because “they love climbing and are naturally found near the mountains.” After this, I (and three computer players) are dropped off at a gray-looking, uninhabitable planet named Irata. There’s one stream of water flowing down the center, but otherwise, the planet is completely gray. I will be stranded here for twelve months, so M.U.L.E. says. I’m then told to pick a plot of land, and since the computer characters are camping near the water stream, I do as well. Afterwards, I have the option to bid on another plot of land, which I do. I outbid the computer and the land, out in the middle of nowhere, is mine. My turn. My Bonzoid is suddenly in the town and there’s a timer counting down on my right. 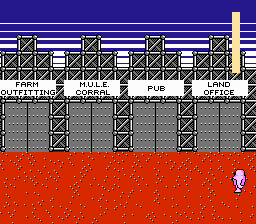 At this point, a sense of regret began to gnaw its way through my brain…
I rush into the Mule Corral and purchase a Mule, outfit it for farming, then bring it back to my plot of land. I then buy another Mule, outfit it for energy farming, then bring it to my other plot of land. Finally, I go into the pub. I smoke, drink, and gamble because, hey, I’m a licentious alien and need that Irata coin. My gambling pays off and I win fifty-five dollars. The computer takes its turn (lousy jerks are much better gamblers), then meteors strike the surface of Irata. They don’t appear to do any damage, but it’s creepy ne’ertheless. Afterwards, I’m sent to an auction, and this is where I became really confused.

Push stick to declare as buyer or seller? Do I have a stick on my NES controller?
I didn’t know what I was buying or selling. I didn’t know what was going on at all, really. More so than other areas, M.U.L.E. really whisks you through this part without giving you a chance to breathe. I stumbled through it the best I could, but at the end of the auction, I had no idea what just happened. After the auction, you’re analyzing your wealth with the wealth of the computers, and then picking some more land. Circa-2000 me decides that three dollars was too much for this game, and turns it off, relegating it to the pile of half-baked sims. 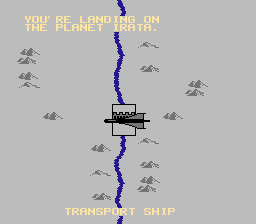 Welcome to Planet Irata, the most neutral planet of all!
Apparently, M.U.L.E. was originally an Atari game, and was then ported to the Commodore 64 and the NES. Given the drab graphics and the all-around strangeness of the game, this information makes oodles of sense. Since this is my final paragraph of the review, I decided to time-travel forward to 2012 and look up an FAQ for M.U.L.E. In order to succeed at the game, you have to really know what you’re doing. For those who didn’t click on the link, one of the sections is called “Increased Production in Context to Terrain.” Sounds about as fun as a priest robot giving you your last rites in binary code. Wacky alien species, an otherworldly, if slightly boring planet, and robotic mules aside, M.U.L.E. is just a bland farming sim set in space. Nobody should get their jollies from such a genre.
D+
The following two tabs change content below.