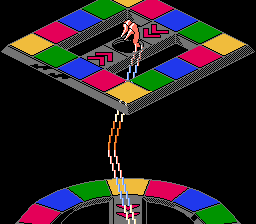 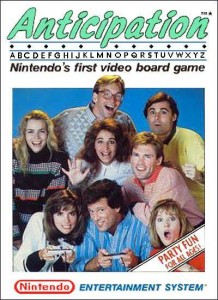 Only people with horrible fashion sense and feathered hair are allowed to play. 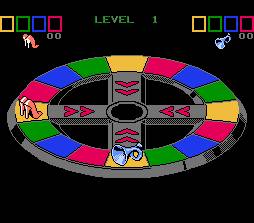 So if the shoe and the horn joined forces, would they become a shoe horn?… I’ll show myself out.

One must play this game with other people. It’s the only way to draw any sort of entertainment from it. With friends, you can laugh at the game, belittling its ability to try and bring any sort of amusement into your day. Without friends, you’re sitting by yourself on a Sunday afternoon with a cup of coffee, wondering where your life went wrong. Why am I playing a game that forces me, a man, to play as a pair of high heels? Are the drawings that this game projects actually drawings, or just evil Satanic verses? Most importantly, do I really want to associate with those people on the cover?

Anticipation is no different from its video board game brethren, in that the game gets old fast. At least other games like Monopoly or “Risk” carry some inherent appeal in their gameplay. Anticipation‘s only real goal is to guess what the computer is crudely (and I do mean crudely – profanely, even) drawing. After you choose to play as a pair of high heels, a teddy bear, a trumpet, or a melted ice cream cone, you’re rudely cast onto a board that’s made up of four colors, pink, blue, yellow, and green. Each color represents a category – Leisure, Natural, “Insert Vague Category Name Here,” etc. – and you must guess a drawing correctly from all four colors to proceed to the next level. That’s really all there is to the game. The only bit of pleasure comes from getting the right answer, because very few drawings look like what they’re actually supposed to be. After some play-time, your eyes will adjust to Anticipation‘s level of crappiness and you will probably be able to guess most of the early drawings. But woe to those who get to level 2 and encounter the category “Whatchamacallit.” It attempts to cleverly combine two pictures into one saying or thing – one of the examples being the word “Captain” followed by a drawing of a log – but because the drawings are so crude, it’s almost impossible to get the correct answer; even the two computer opponents I played with didn’t get some of them, which makes me wonder if they’re even answerable. I know that the “poor drawings” are the point of the game; where would the challenge lie otherwise? But it should be possible to create a challenging and enjoyable video board game without intentionally worsening  the NES’ graphical capabilities.  Unless you have a bunch of buddies and your only goal in life is to drink copious amounts of Natural Light whilst playing the worst games imaginable, then Anticipation should not be in your future.