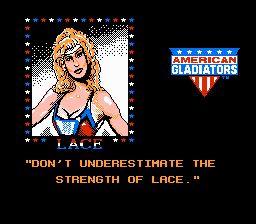 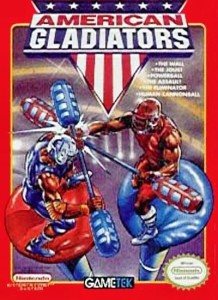 Only in America can two men in tights compete atop puffy mushrooms to see whose genitalia is the largest. 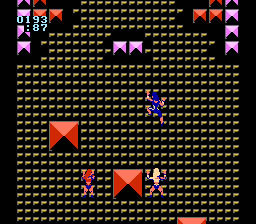 Can you scale the wall? I couldn’t.

Even as a young child, the concept of “American Gladiators” seemed a little too silly to me. Why would a group of men and women with supremely feathered hair compete against each other in ridiculous outfits on obstacle courses designed only to give pain? Well, kiss my grits and call me Alice, because I’m as shocked as anyone that I enjoyed American Gladiators for my Nintendo Entertainment System. I’m not sure how accurate the game is compared to the show, but each of the events are over-the-top and ludicrously entertaining. Apart from making gobs of money, isn’t entertainment what gaming is really all about?

Five different events pummel you from the get-go: Joust, Wall, Human Cannonball, Powerball, and Assault. Joust is Urban Champion with ample hairspray, and jousting sticks. Each gladiator requires slightly different tactics to knock off their plush mushroom. Attack from up top, downtown, or in the groinal region. It matters not unless they fall! “Wall” should really be called “Wall Climb,” as that’s all you do. Alternate between ‘A’ and ‘B’ to ascend, but don’t touch any of the blocks or let the thigh-tastic women drag you down. Human Cannonball is my personal favorite. Jump onto a rope that’s swinging between two platforms and swang directly into your shielded opponent on the opposite end. Watching a goofy pixelated character fly off into oblivion is one of life’s simple pleasures. Powerball places you on an arena, with five open holes and a swarm of gladiator jerkbutts. Plug the holes with the balls that appear on either end of the arena, and gain an extra life. Don’t let any jerkbutt touch you with a ball in your hand or it will disappear before you can utter the ‘o’ in bro! Finally, Assault launches loads of projectiles at you, courtesy of an always-moving gladiator. Ascend up the course, avoid the projectiles, take him down with your own missiles if you want, and get out of there. After four rounds of these five events (with each round increasing in difficulty), you get to engage the mysterious Eliminator course. If you succeed, you’ll become the most American of them all. Fail, and they’ll mail your butt back to Russia.

If feathered hair is the price of being a true American, then I’ll see you at the salon.

Playing and enjoying American Gladiators is like getting lost in the plot of a really bad Arnold Schwarzenegger film. You know you shouldn’t be succumbing to the stupidity oozing out of your television screen, but every passing second compels you to play/watch more. Before you know it, your shirt is in tatters on the floor, you’re sweating and panting heavily, and Warrant is blasting out of nowhere in the background. You roar in a triumphant stupor. You are an American Gladiator.