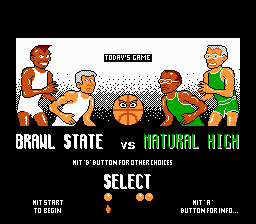 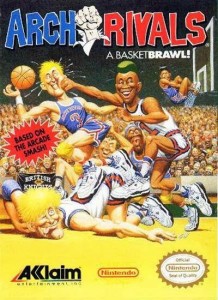 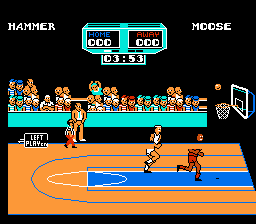 Takin’ it to the hole or downtown or something.

Did somebody say “basketbrawl“?!… No? Anybody? Alright, well, Acclaim said it, and lo, Arch Rivals was born. I’m not sure if this game preceded all of the other sport/fighting mash-ups, like Road Rash, Mutant League Football, NFL Blitz, etc., but it was definitely a trailblazer. This is my kind of basketball game: no stats, no worrying about a team, no BS. It’s just you, your partner, and a couple of fists. If you can stomach the simplicity, and have a friend in tow, this is a halfway decent basketball game.

You have your pick of four teams, Los Angeles, Chicago, Brawl State, and Natural High. I’m not sure that it really matters what team you pick, strategy-wise, but which character you choose does matter. You have eight individuals to choose from, many of them bespectacled, angry young men, with names like “Mohawk,” “Moose,” and “Tyrone.” You’re given little summaries of each player underneath their picture – “Good Defense,” “All-American,” and “Tough & Mean.” Believe it or not, the characters do play a little differently, although methinks the differences were more noticeable in the arcade. Nevertheless, don’t pick Moose: the game calls him “a real champ,” but after getting the ball stolen from me dozens of times, I can say he’s more like “a real chump!” Sorry about the second-degree burn there, Moose. 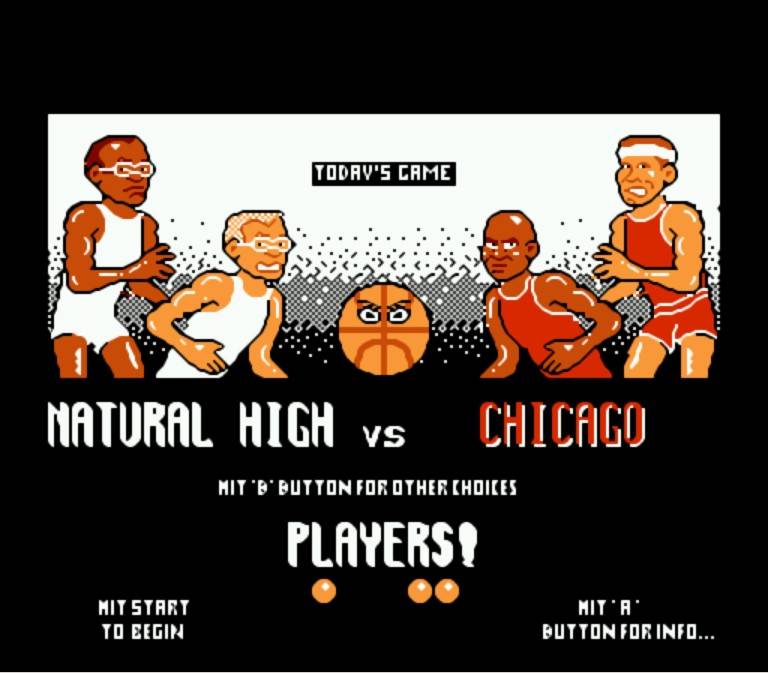 I’d say this picture speaks for itself.

The gameplay involves getting the ball, running, and hoping to God you don’t get punched by the other team before you attempt to make a basket. And here’s where the key problem with this game sets in: it’s completely random as to whether you’ll make a basket. I’ve scored several times in a row before, and I’ve also missed several times, but I wasn’t doing anything different either time; all the game asks you to do is press ‘B’ to throw the ball. It’s odd, but one never gets too mad while playing this game because punching the other team is just so satisfying; especially after they score a couple. The sound effect for the punch holds up perfectly today, and it really lets off that aggression. Had All-Pro Basketball incorporated this simple mechanic into their game… it probably still would’ve sucked, but at least it would have had one cool feature.

This doesn’t really affect the game or my score whatsoever, but there are some odd drawings of the characters in the game. On the team select screen, there is some definite homosexual “tension” between the teammates. I wasn’t looking or expecting to find such implications in the game, either; it just feels incredibly blatant. On a lesser note, the cheerleader’s skirts seem way too high during the actual game; you don’t see anything, but it’s a little disconcerting. Faces of players look like they were scrawled on by angry, emotionally detached children who have yet to feel love. It doesn’t really affect the game at play, but more effort could have been given to them.

Two-player simplistic basketball with fighting, you say? I’m still not a b-ball fan (or b-brawl, for that matter), but compared to All-Pro Basketball‘s overwhelming amount of suck, Arch Rivals is downright playable.