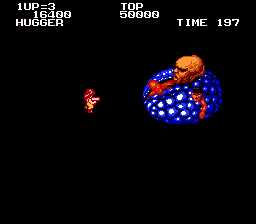 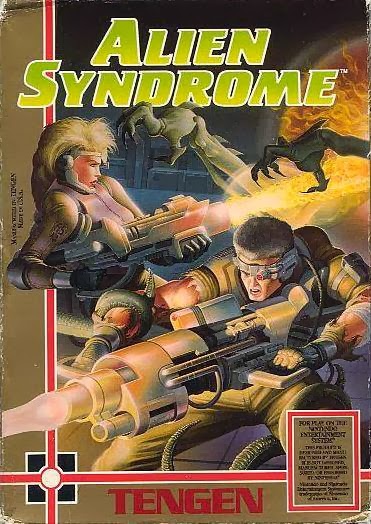 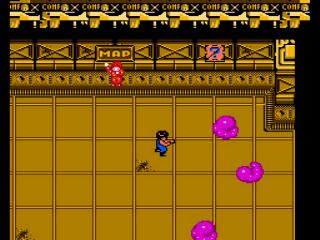 Thankfully, if the aliens touch your buddies, they don’t die like in Zombies Ate My Neighbors.

When I first popped in Alien Syndrome, I was having flashbacks to Alien 3. In both games, you are supposed to rescue prisoners from the alien menace, but unlike Alien 3, Alien Syndrome gives you plenty of time to rescue them AND provides you with a map to locate your buddies. The levels in Alien Syndrome are not nearly as confusing either. It’s refreshing, and unfortunately, makes the game too easy. The enemies that get in your way are a cinch to take down, even with your lamest gun. The only difficulty comes with the bosses. For whatever reason, your character seems to turn into a stiff automaton when you’re trying to fight a boss. The boss is zooming all around you or coming right for you, but there’s no quick way to ever avoid it; a jetpack or boost power would have been nice. Throughout the levels, there are power-ups to upgrade your weapon, such as lasers, flamethrowers, etc. but they all seemed to do a similar amount of damage. This is pretty much the entire game right here. It’s as simple and pick-up-and-play as they come.

As much as Alien Syndrome doesn’t arouse the bile from the back of my throat, there’s not much to recommend here either. It’s average at best, and many other NES games have provided gameplay like this, only better. It’s like a boy or girl who’s really sweet and nice, but you just aren’t interested because they’re so plain and lack self-esteem. If only Alien Syndrome would have asserted itself a little more, perhaps it could have been special. 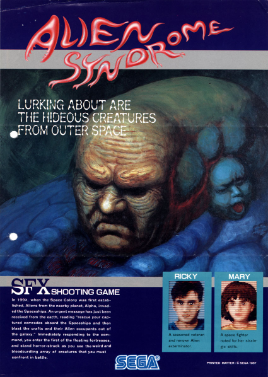 This is a gnarly, Giger-esque poster, eh? Also reminiscent of “The Thing.”