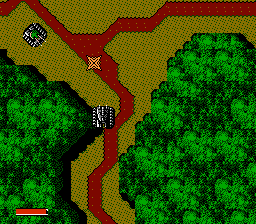 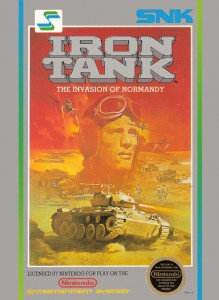 You think those tanks are going to let your iron butt through?! TAKE ‘EM THE @!@! OUT!

There’s nothing wrong with invading Normandy every now and again, especially if your mode of invasion lies solely within an Iron Tank*. But for crying out loud, would it kill the tank manufacturers to increase said Iron Tank’s maneuverability? I appreciate that it has a large life bar, can hold up to four types of ammunition, including regular bombs and fire bombs, and is an all-around awesome piece of machinery. This is Normandy, though, and to win this war singlehandedly, as the tank operator is prepared to do, it would be nice if you could control the turret manually, like you can the machine gun. By turning the tank, you turn the machine gun, but in order to maneuver the turret, you must press ‘B’ and hold the directional pad in the direction you wish to inflict the most damage. It sounds simple enough, but while you’re operating the tank, it can feel like the turret has a mind of its own at the worst possible time (like being surrounded by the enemy’s tanks). Frankly, the machine gun is a waste of time. It can shoot enemy soldiers, but it does little to no damage to other tanks. If you’re using the tank properly, you’re only going to be shooting from the turret. Thankfully, there is a plethora of ammo on the battlefield, so plunder to your heart’s content. Don’t worry about shooting every soldier that comes into your line of sight, either. Focus on the tanks. After all, France built Normandy on rock and roll and, according to SNK’s version of history, a butt-load of tanks. It’s your job, as the One and Only Iron Tank, to destroy them all. Then Normandy. Then the world.
B-
*I do not actually advocate for Normandy invasions. A joke, this is.
The following two tabs change content below.