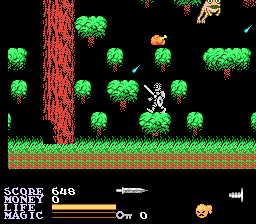 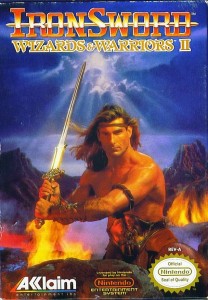 Yes, that’s Fabio, holding a decidedly faux-iron sword. He really did take this picture near an erupting volcano, though. 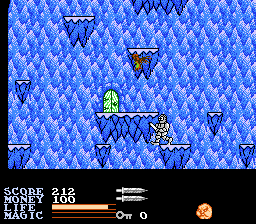 Birds drop dookies on your head. Believe it or not, the dooks really do penetrate through steel. Acid dooks.

For better and for worse, Ironsword retains the Wizards & Warriors template. Kuros, the bug-eyed, Monty Python-esque knight in all Wizards & Warriors titles, lives or dies by his sword – a sword that may or may not be made of iron. It is not the Ironsword that you initially wield, though. In W&W II, the goal of the game is to reconstruct the Ironsword and defeat the Wizard in five thrown together stages. Find keys to open chests to gain treasure to further help your quest. There’s also a shopkeeper now where you can use your previously useless treasure in exchange for keys, food, and special items, among other things. Every stage forces you to ascend upward while Kuros fends off kamikaze enemies from every angle. The original Wizards & Warriors did this too, but here the enemies feel angrier, and Kuros still can’t swing a sword to save his life. C’mon, Rare, you had two years to fix this crappy mechanic! What you hope happens is that the enemies run into your sword as they’re attacking you. In other words: the only way you fight enemies is by not fighting them at all. Position your sword so that they run into it. The execution is poor, especially when you have several enemies from every direction coming at you. Even if you kill a couple, it’s nearly impossible not to get hit. Rare also took out the unlimited continues from the first game, though I’m not sure why; you need them just as much in Ironsword, if not more so. Sequels should be, in theory, an improvement over the original, or at least be on par with them. The sloppier sword mechanics and lack of continues really bring Ironsword down.
C
The following two tabs change content below.