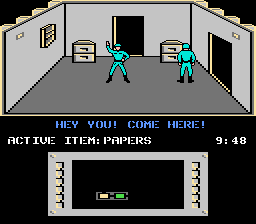 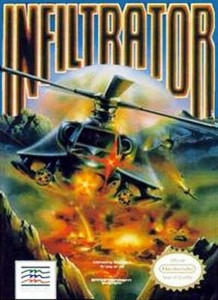 Helicopter’s coming for you, son!

You’ve interrupted the guard’s calisthenics. You shall now pay the ultimate price.

I’m not sure whether I should take this helicopter simulator/spy game seriously. For starters, the lead character’s name is Jimbo-Baby McGibbits. Hilarious, yes, but can I trust the man? I may have an issue or two with Infiltrator’s intentions, but what really drops this game (like a bad habit) for me is the learning curve. There are two types of missions you can select from the outset: helicopter flying missions and action espionage missions. The former feels more tedious than it need be. Once you get the helicopter in the air, there is no radar to guide you to wherever you need to go. From what I understand, all of the different dials and buttons are meant to tell you something, but, much like the origin of our friend McGibbits, it’s all very vague and obscure. What did us poor gamers do before tutorials? Oh that’s right, instruction manuals. I checked an FAQ to help my confused self, but all it did was verify what I had already assumed: flying the helicopter properly takes a lot of work and you have to be willing to fail. I was willing to do neither so I moved on to the espionage missions. You’re equipped with a few different items, like false papers, gas grenades, explosions, etc. Once you Infiltrate the enemy base, it’s all a matter of searching through desks to find random items. This section was the more interesting of the two and held my interest for a longer time. I still had no idea what I was doing, but unlike the helicopter scenario, I didn’t really care. Gassing guards is fun. Sometimes in life, that’s all you need.
C
The following two tabs change content below.