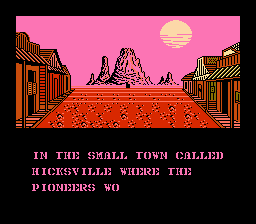 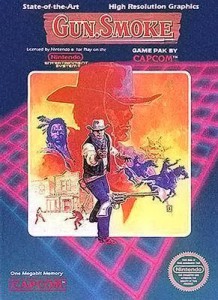 Capcom’s riding off into the sunset with a trough full of dollars and my utmost respect. 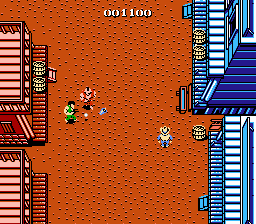 She may not be the purdiest game on the block, but her heart is pure.

Perhaps I’m just happy to play some good games after so many mediocre to crappy ones, or perhaps I’m just getting older and violent action games really take away from the emotional weight of life, but playing Gun.Smoke after Guerrilla War – two shoot-em-all-and-let-God-sort-em-out games – really brightens my day. It’s been rare in this quest for me to find one classic NES game I’ve never heard of, let alone two in a row from similar genres. Gun.Smoke delightfully bucks that trend, no thanks to Capcom’s brilliant, simplistic game design. Who knew a vertically-scrolling shmup could work set in the Old West?
The goal of each level in Gun.Smoke is to take down the head bandit of a particular area. In the first level – the aptly named Town of Hicksville – you have to take down Bandit Bill, but first you must annihilate a wide variety of minions. Snipers shoot down from second-story windows, massive goons throw sticks of dynamite at you, and this is just the beginning. Outside of a couple helpful merchants who will offer you weapons or other items (getting a horse will allow you to move faster and take extra damage), the entire Old West is against you. Lives are scarce and the game is one-hit kill approved. If you’re a veteran of shmups, though, the game won’t seem hard until the last couple levels when stuff gets real and you start fighting ninjas (seriously). No Capcom or shmup fan should be without this game. My only real complaint – especially after the vastness of Guerrilla War – is that the game’s too short. Six levels? The Old West was way bigger than that. No need for me to nitpick, though, especially when life could be a lot worse. Gun.Smoke is aces.
A-
The following two tabs change content below.