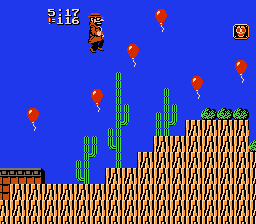 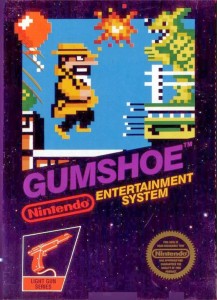 Godzilla’s got it in for the gumshoe. 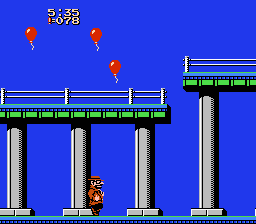 Return the diamonds to South Africa lest Congo Jack come and tear you a new gumshoe.

A quick confession: I’m playing all of these Zapper games with my computer mouse. I’m not sure it makes any of these games easier, per say, but I’ll venture a guess that it does make them more responsive. I don’t think a twenty-five-year-old Zapper is the right apparatus to play some of these quick-on-the-draw games, like our friend Gumshoe here. I’ve never “shot” up a screen as much as I’ve done with Gumshoe and I can’t imagine the Zapper registering on the screen like it should. Shame, as I’d much rather play the “authentic” way, but using the mouse is a much more efficient and competent way to complete my task. Besides, it’s my NES blog and I’ll shoot like I want to.
Gumshoe is how a Zapper game should be done. Yes, all you do is shoot the screen, but instead of merely taking down bad guys and avoiding good guys, you accompany a bumbling detective on his quest to collect diamonds. The diamonds are for the evil mastermind, King Dom (*sigh*…), as Mr. Dom has kidnapped the detective’s daughter. Instead of moving the detective along with the D-pad Gumshoe takes control of him for you. All you have to do is shoot the detective to make him jump: jump towards balloons which give you ammo, jump over or under enemies, jump over large holes. Gumshoe will make you jump jump. It’s much more complicated than one might think, though, as you have to time your shots/jumps properly. Some areas within each of the four levels really throw everything at you all at once, including exploding skull blocks, flying hammers, goofy birds. Another confession: I never got past the first level, but that didn’t stop me from trying over and over again. Despite the game’s difficulty, Gumshoe is as addicting as any Zapper game I’ve ever played, and dare I say, just a well-crafted game in general. Leave it to Nintendo to develop the best games for their kooky peripherals.
B
The following two tabs change content below.