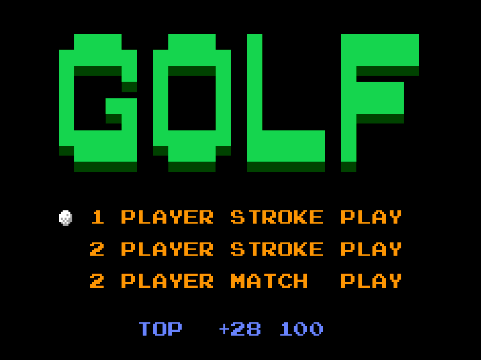 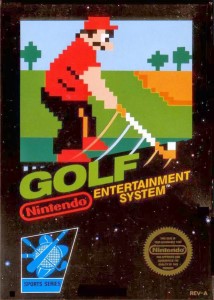 Mario soon lost some weight and shrank in stature. Princess Peach remained committed to him, stunning millions in the Mushroom Kingdom. 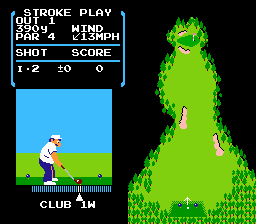 I expected good things. Good things I did not receive.

Open wide for some… golf? Only if you have a thing for hideous pants and racial inequalities. Golf transcended boundaries back in the day, in that, it was the first golf game made for a console where you could sort of see what was going on. I’m not sure if any of the Ataris or Colecos had golf games, but if they did, I can only imagine how horrible they looked. In other words, Golf was a golf game that was playable. You could read the course layout and have an idea of what you were supposed to do. Even Mario decided to join in on the golfing “fun” long before he had the financial wherewithal to create his own tournament.
So Golf is visually acceptable, but how does it play? Well, let’s just say Baseball runs circles around this stinker. Obviously the goal of the game is to play golf and win. You have a wide selection of wood and iron clubs, and a power meter that determines how hard you’ve swung. You press ‘A’ to start the blue-colored meter and ‘A’ again when it has reached the small, white-colored portion. Well, I’ve hit that white section time and time again, and have yet to obtain par on any of the courses. The ball, and the power with which you hit it, seems to do what it wants to. Sometimes it goes far, sometimes it barely goes anywhere. Putting can be obnoxious as well, but for me, it was just annoying trying to advance in the game without feeling like Roger Fox from “Foxtrot.” Despite the relative simplicity of Golf, other golf games that actually, you know, play like golf have come along and are far, far superior. This one can’t even summon a “nice try” golf clap.
D-
The following two tabs change content below.