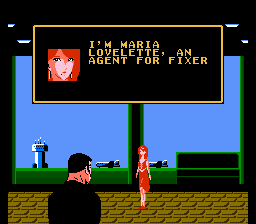 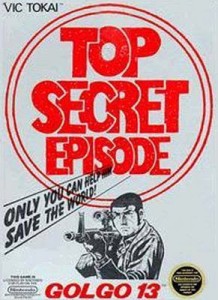 Just as only you are able to prevent forest fires, only you can help Golgo save the world. You’ve got a lot on your plate, I’d say. 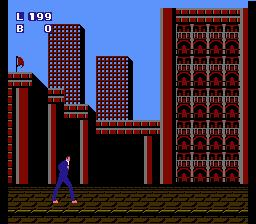 Before embarking on his top-secret mission, Golgo-13 decides to buy a fresh purple suit and strut about town for one last night of drinks, dames, and death.

“Top Secret Episode,” eh? How top secret can it be when it’s the only episode packaged into a surreal, almost-wonderful-but-mostly-hideous Golgo 13 game? The “top secret” handle – where the story’s really top-secret except for anyone who plays the game – is just a small example of this game’s overwhelming paradoxes (yes, I’m really reaching for a beginning, but this is just how life goes, sometimes beginnings come naturally, other times you have to reach deep within the recesses of your brain and STILL NOTHING).
As with most of life, we should really start at the beginning: wonderful cinematic cut-scenes containing a tried-and-true 80s action-movie plot – complete with explosions, mysterious but awesome protagonist, and Russia-fingerpointing – begin the game. Already I’m into Senor Golgo… then I start to play the game. First thing I notice are the graphics. Did Vic Tokai spend all their budget on the opening cutscenes? Golgo 13 looks like he has blocky parachute pants on, for crying out loud. Later on, I meet with a man who literally has a Lego head. My conclusion? Cut-scenes = well-crafted; rest of game’s graphics = five-year-old sneezing pre-chewed crayon flecks onto a programming screen.
Actually getting through the game is a massive chore, which is strange because not much really happens. Walk across the screen, duck into a building and look for someone to talk to, shoot a couple dudes – or rather, attempt to shoot a couple dudes. Shooting is fine, except you can’t duck and shoot like your enemies can. This means you take numerous bullets to the kneecaps and there’s not a damn thing you can do about it. Is it that hard to copy from the Rolling Thunder playbook? On the other hand, sometimes the game randomly enters you into a scrolling sniper mode, which has you shooting helicopters and really bouncy guys (presumed to be Russian ninjas). The sniper mode is incredibly fun, while the side-scrolling portions are overly cheap. Your only hope in the latter is to jump over their bullets, but that only gets you so far, especially when there’s more than one enemy on the screen.
If Golgo-13 wasn’t so concerned about contradicting itself at every turn (it’s as if Vic Tokai really didn’t know whether they wanted to make a good or bad game), this could have been an exciting hybrid of Rolling Thunder and Mission Impossible. The finished product, sadly, remains cow dung filled with pockets of frosting. Make of that what you will.
D
The following two tabs change content below.