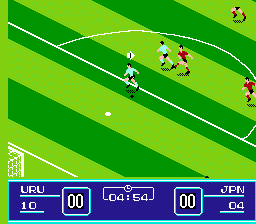 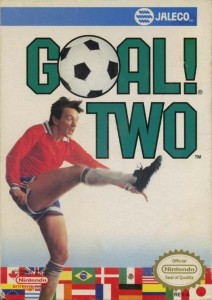 Those shorts are several inches too high for most tastes.

Sequels are supposed to improve things in a series, not make you hate the game more. Goal! Two apparently didn’t get the memo for this, and while they added a whole slew of features, they forgot to add that simple ingredient that would have tied the whole game together: fun. Cliche’? Sure. Trite? Absolutely, but the unvarnished truth, by gum.
This time, instead of choosing from four countries for the World Cup, you can choose from about sixteen countries. Improvement! If you play a simple VS. Game, you have more options for countries, such is the game’s odd logic. Unlike in the first game, there are stats here, but I can’t read gibberish, so I didn’t change any of them and just went out and tried to play. Now, the gameplay… let’s stop here. Goal!, for all its flaws, was a simple arcade soccer game. I’m sure if you could figure out how to pass appropriately, it would have been a solid game. Goal! Two tries to go for bigger and better, but forgets that the NES, bless its dusty heart, can only handle so much. In addition to adding stats and other “big boy” options, the game’s soccer field is about two to three times larger than the one in the original. There was absolutely nothing wrong with the size of the original game’s soccer field. It was perfect! Also, the game’s AI is so hard, cheap, and blindingly fast compared to your team, that it’s nigh impossible to advance even to halfway across the field. Thankfully, your goalie has it going on and can block potential goals like he was protecting the mayor or something, but what’s the point of blocking if that’s all you’re going to do? Finally, as in the first game, you don’t actually kick to your teammates. You kick in their general direction. Not only that, your kicks seem like little wiener kid kicks: slow and useless. It’s a shame, as I was really looking forward to kicking out some soccer jams on the NES, but the Goal! series is not where you come to satisfy those particular jollies.
F
The following two tabs change content below.