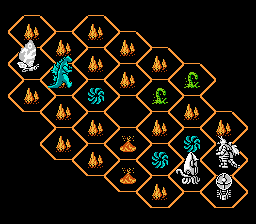 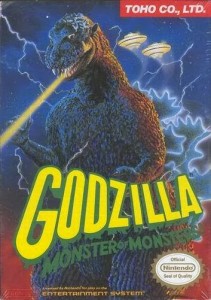 Ah, the Nuclear Age was a real treat, wasn’t it? Good thing society has moved on… oh wait. 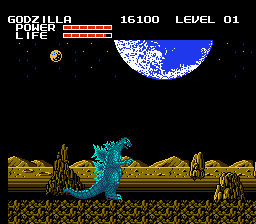 Godzilla kicks rocks. They had it comin’.

I’m not sure if kids today appreciate Godzilla as much as children of the 80s and 90s did, but by gar, I couldn’t get enough cheesy rubber monster movies back in the day. Godzilla was the king of them all (sorry Kong), which is why I was so excited when I saw this game at my local Blockbuster back in ’91 or ’92. I rented the crap out of this thing, but even then, I remember thinking to myself, is this it? Shouldn’t Godzilla have more to it? Twenty years later and brimming with wisdom and insight, I can honestly say that my seven-year-old self was on to something. Is this it, indeed. Was the gameplay contained in Godzilla all Toho can think of to satisfy the Godzilla diehards?
Perhaps I’m being too harsh on Godzilla, so I’ll let my description of the gameplay allow you to form your own opinion. The game starts you off on a grid board, with Godzilla and Mothra on one end and other random monsters on the opposite end. You can choose to move Mothra or Godzilla two spaces ahead, and when your turn is over, whichever character you decided to move enters into a side-scrolling area. These areas are all the same: avoid the large amounts of artillery fire at Mothra/Godzilla. There is no real reward for destroying the enemies, other than hoping that their mangled remains will contain some health. In essence, these sections felt pointless, despite the logicality of them being there. Of course you, as a monster, would fight the military, but why does it have to feel so boring? Next up: the monster battle sections. These were slightly more entertaining, if only because it felt right seeing two hideous large monster aliens duke it out with one another. It’s button-mashing goodness, but right away, some of the evil monsters’ power moves turn out to be down right cheap. One particular monster (Megaura, I think?) killed Mothra with one hit! If you’re thinking to yourself, that’s disgraceful, you’re correct. Godzilla is, by logic, slower and has less maneuverability than Mothra. He didn’t seem stronger either, which meant he died a lot sooner. It’s a shame considering this is supposed to be Godzilla’s game! Make him the badass he was meant to be!
If you can get past the fact that the side-scrolling stages are worthless (especially with Mothra, who can fly over the artillery and basically bypass everything) and the monster battles take some figuring out, it’s not an awful game. Still, it’s not the Godzilla game fans the world over were hoping over. That would come later with the King of Monsters. If Toho could have found a way to combine the over-the-top hysterical fighting of the King of Monsters with the smash-and-bash Rampage, there’s a chance a sweet Godzilla game could have been birthed from such an experiment. But hey! This particular Godzilla game was popular enough to birth a sequel, so we’ll see how that goes tomorrow.
C-
On another note, according to the number of NES games currently chronicled over at Nintendoage.com (the incredibly reliable site which I use to keep track of the games I play), I am officially one-third of the way through the NES library. I passed this “landmark” without realizing it back at #256, so hoorah! And woopee! And the like. I can not honestly believe I have gotten this far, and worse yet, that I still have two-thirds more to go! The NES churned out a lot of games in its nine years. Thank goodness that, for the most part, this reviewing gig has yet to grow old! Here’s to 509 more reviews, and then, sweet, sweet rest.
The following two tabs change content below.