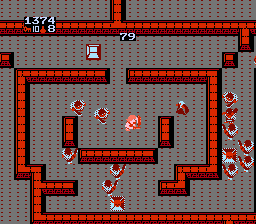 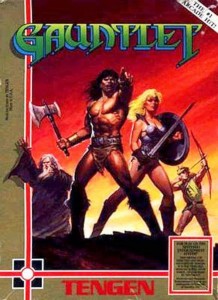 I really want to know what Beefcake McGee is pointing at. 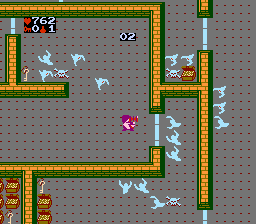 Somebody sneezed on the graphics.

Gauntlet is not a game for those who just want to throw on some Benny Goodman and settle back into a leather couch with a glass of wine. Even in the initial levels, the game can be merciless with the waves and waves of regenerating enemies. Gauntlet is a game for those who desire great challenge amidst overwhelming odds. You get your choice of stereotypical character: archer, barbarian, wizard, and half-naked chick. Each has different attributes that lend themselves well to the fray. I chose the half-naked chick, not because she was half-naked, but because she was the most well-rounded of the four… I know, I know, but it’s true. There are 30 levels at your disposal. Your life bar slowly whittles down over the entire game and can only be replenished through meat pies and such. Destroy all the enemies, navigate the sometimes puzz-tacular environments, and get as much loot as you can. There’s no real point to the loot, but it makes a cool chime noise when you pick it up that’s incredibly satisfying. If I were you and you were me, I’d bring a friend along for the ride. It’s a shame the game’s only equipped for one extra player ( I believe the original arcade was four players, which makes sense given the character selection), but at least they give you that much. Should you desire to actually beat the game, a friend is required, unless you just want to enter passwords over and over again. In other words, unless you’re crazy and have no friends.
B+
The following two tabs change content below.