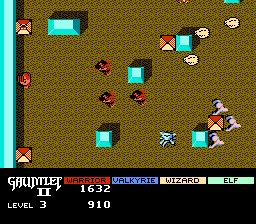 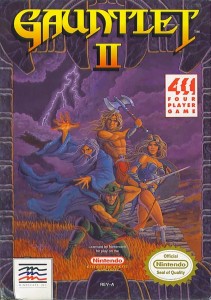 Thor confused at what he doing battling with three dorks less powerful than he. 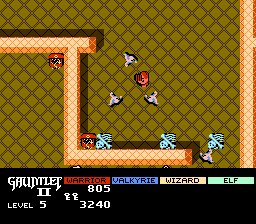 Mind the bones of your fallen comrades.

Perhaps I picked the wrong character this time? Perhaps the gameplay just didn’t hold up over a rushed sequel? Either way, Gauntlet II takes everything that was pure and wonderful about the original, and promptly squishes it under The Warrior’s blood-soaked heel. From the first level onward, something just feels a bit off. The graphics are more colorful, sure, and the controls haven’t changed, but the lack of music and addition of grainy voice samples really destroy any sort of moody atmosphere that the first one cultivated. Worse yet are the “power-ups” that seem to be more of a hindrance than a help. The “transportation” one is the biggest offender. Going through walls seems like a cool idea to help you avoid enemies, but it also prevents you from collecting other items, like treasures and HEALTH, for crying out loud! The levels also don’t seem as well-made. They’re larger, less interesting, and not nearly as challenging (although there are more of them – 100 levels, to be precise). Perhaps the reason for the levels being larger is that, with this sequel, four-player support has finally been added. I’d imagine it’s the best way to play the game. Playing by myself, I experienced nothing but sorrow, emptiness, and a real rage dump for the newer features. KHAN!!!!
D+
The following two tabs change content below.