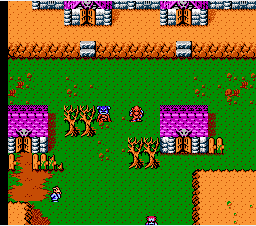 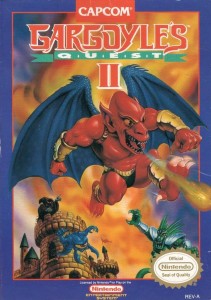 Firebrand, your head is much too large for your squatty body. Also, Capcom thinks mighty highly of themselves. 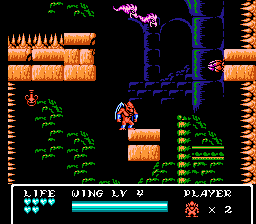 C’mon, one wing flap after the other.

I’ve always found it odd for game developers to begin a series on one console, then bring the sequel to a completely different console; even in the early 90s when there weren’t well-established “rules.” What if the audience didn’t follow from one console to the next? Gamers were younger and thus poorer then, and couldn’t be expected to shell out money just at the drop of Capcom’s whimsical hat! What am I blathering on about, you ask? Gargoyle’s Quest was a top-down action game with lite RPG elements for the Game Boy. Gargoyle’s Quest II is obviously on the NES, otherwise I wouldn’t be reviewing it. I just think it’s odd that Capcom would move the series over to the NES, in what I’m assuming was an attempt to increase the series’ popularity and get more money…? I could speculate all day, but why waste everyone’s time? To the review!
The Gargoyle’s Quest series, beginning with the original Game Boy game and ending with Demon’s Crest, was a spin-off from Ghosts and Goblins starring the lovable crag-mouthed demon, Firebrand. Gargoyle’s Quest II, like its predecessor, is a sometimes top-down, sometimes side-scrolling affair that hinges on your ability to precisely maneuver Firebrand. If you can’t make him float as precisely and as accurately as he needs to; if you can’t make him latch on to the side of platforms, he will fall and likely take damage or straight up die. This game, like Ghosts and Goblins, takes little pity on those who desire a straightforward gaming experience. What seems like a relatively simple exercise – float from platform to platform – actually takes great skill in timing. If you can handle this, you can handle the entire game.
I’d like to say that Gargoyle’s Quest II is a fun and fulfilling experience, but it lacks any sort of variety that would have increased its replayability. It’s certainly enjoyable while you’re playing and you can tell from the overall polish of the game that Capcom took great relish in updating its spin-off series from gray-and-green to hi-fi color. Still, I was expecting something more than a series of timing exercises. Let’s call it, “heart.”
B-
The following two tabs change content below.