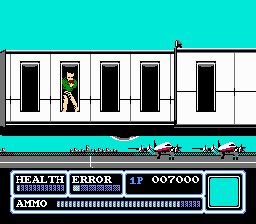 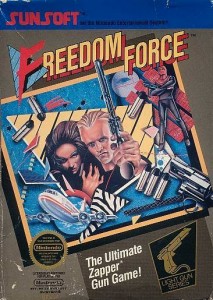 The ultimate Zapper Gun Game? And Duran Duran co-wrote the script? I need to play this!

The game’s quite bloody for an early NES game. Also, don’t be fooled by the woman in a purple dress: she’s really an old crone that will transform you into a wise-cracking cat with sunglasses if you’re not careful.

Freedom Force is, by all rights and means, the spiritual successor to Hogan’s Alley. Were it Nintendo developed, I would call this game Hogan’s Alley Part II: And the Streets Ran Red. The reason for the comparison? Freedom Force has you shooting bad guys and avoiding hostages, just like in Hogan’s Alley. The difference? Faster gameplay, a variety of weapons (to acquire, shoot the bottom right hand side of the screen when a different weapon flashes), and real challenge. The opening cinematic also draws you in, with its excellent cinematography and delicious mid-80s action movie feel. The bad guys pop up at different places every time you play the game, which gives a good incentive for replay value. The game is incredibly hard, as you only have one life and no continues. To gain any sort of health, you have to shoot a health insignia the second it flashes in the right hand corner. Easier said than done. You better be Quick Draw McGraw if you hope to achieve that and kill all the foes coming at you. There’s only so much one can do with a Zapper game, so there’s not a lot of variety here. Still, it’s far more entertaining than Hogan’s Alley, despite the fact that you’re performing the exact same tasks. It just goes to show that cinematic presentation can liven up even the simplest of gameplay.