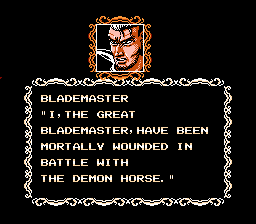 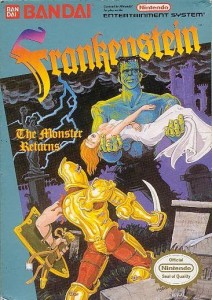 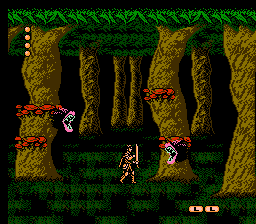 Gonna pass on that kiss, bae, maybe next time.

What kind of revisionist history does Bandai think it can throw at the good people who play their games? Frankenstein’s Monster has never been evil: he’s a misunderstood creature created by a scientist, Dr. Frankenstein who, depending on the interpretation, is just insane or filled with pride, but usually regrets his choice of actions. In this game, the Frankenstein monster (here called simply “Frankenstein”) is evil beyond compare. He’s kidnapped a girl and dares the main character to come after him, for crying out loud! As for the good doctor Frankenstein, he is nowhere to be found in this particular, uh, adaptation, but what is ever prevalent are the feel and mood of the Castlevania series. This game is Castlevania-lite in every way: graphics, music, overall design of the main character (never mind that he uses a sword instead of a whip). I’m surprised Konami didn’t sue, truthfully.
It’s just a shame Frankenstein didn’t adopt the best part of Castlevania: the combat. Combat here is hit-or-miss, literally. Swarm after swarm of evil trolls, moth creatures, water dragons, raging manatees and other random creatures will stomp after you. Sometimes it’s easy to hit them, other times you’ll swear you hit an enemy, only to biff and get hit yourself. Don’t feel like you have to go after every enemy: you only have one life and two continues so make them count. Potions can be yours, but it’s a gamble because acquiring said potions can involve fighting a mini-boss that could kill or weaken you greatly. The choice is yours!
Despite Frankenstein being a complete rip-off, there is a part of me that admires its ramshackle spirit, particularly the translation. I love how belligerent Frankenstein’s monster is. Thanks to his ridiculous dialogue – “You’ll have to do a lot better than that to beat me!” – he’s the villain you love to hate. Pretty much any boss – whether minor or major – has something inane to say about how powerful they are. It feels like any superhero cartoon where the villain brags constantly for no reason. It’s great and I could see myself powering through this game just to read the dialogue, but the gameplay itself is average at best. A sparkling personality isn’t enough to make this wannabe worth up-holding.
C-
The following two tabs change content below.