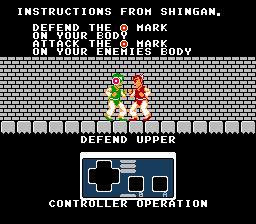 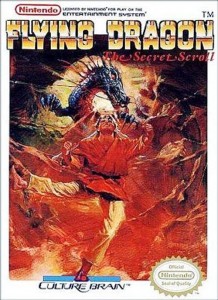 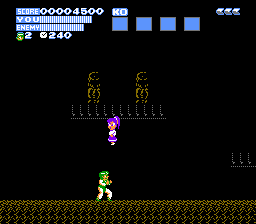 This right here is what fighting games were like before Street Fighter II.

Before fighting games ran amok after the insane popularity of Street Fighter II, developers like Culture Brain were trying to expand upon the common brawler. Rather than submit to making another Double Dragon or Bad Dudes, Culture Brain wanted to have the best of both worlds: make a side-scrolling brawler and an early attempt at a fighting game. Flying Dragon has guts to be different in a “me-too” NES culture, but does it have what it takes to battle against commonplace brawlers? Short answer: no, but not for lack of trying.
Flying Dragon is indeed split up into two sections. The brawler portion is little more than an enhanced Kung Fu, though not nearly as entertaining as Fist of the North Star. Interestingly enough, though, each level has about five “bosses,” enemies that drop key items each time you defeat them. Also like Kung Fu, the environments and enemies will repeat a lot. Each level’s backgrounds will repeat at least three times and the enemies NEVER STOP COMING. Keep jumping from platform to platform over their heads, so you don’t have to bother fighting them. It’s clear that Culture Brain’s heart wasn’t in this portion, however, as the tournament a.k.a. “early fighting game” portion is leagues more interesting. “Interesting” doesn’t necessarily translate to good, though. I admire how this portion of the game controls. You are required to defend your upper, middle, and lower body, while also trying to attack those same sections on your respective opponents. You’ll know when to defend and when to attack based on when these red bullseyes appear on either you or your opponent. It’s unique, to be sure, but the fights themselves just aren’t that fun. The NES pad, God bless it, just wasn’t made for fighting games. Unique, but clunky combat still basically translates to clunky combat. Later on, the game inundates you with fights and it quickly grows tedious.
I admire Culture Brain’s attempt at something new, but this game just doesn’t measure up. If they had taken the time to hone the brawler section, while smoothing out the “tournament” portion, this game would see its rank on many a retro gamer’s “best-of” NES list. Alas, all of the secret scrolls in the world couldn’t keep me playing this game.
D
The following two tabs change content below.