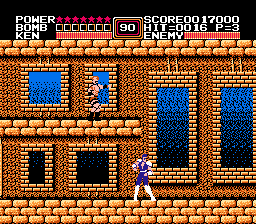 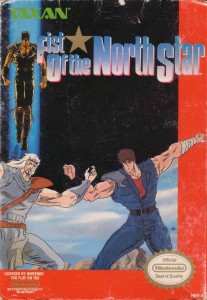 It’s been… one week since you looked at me!

Nobody likes a chronic gambler, but most people like to tumble the dice every now and then. So here’s my shakedown: I kinda like Fist of the North Star for my Nintendo Entertainment System. Many NES lovers seem to hate it, and I recall it being in Seanbaby’s list of 20 worst NES games or possibly worst games of all-time. It isn’t so bad as all that, though. It’s silly and the controls are pretty useless, but I’ll be darned if it doesn’t feel like a spiritual successor to Kung Fu, the first real “fighting game” for the NES.
Fist of the North Star is based on an incredibly popular anime/manga series, and I would talk at length about one or the other, but I have neither seen nor read them so I have no frame of reference; skimming Wikipedia doesn’t cut it either. What matters is the game: you are a karate kickin, chop-sockin master. ‘A’ controls your punches, ‘B’ controls your kicks, and ‘Up’ makes you jump. All you’ll need to take out the incredibly weak fools that lurk here are well-timed kicks (to the throat, preferably) and you’ll be fine (how ironic that punches aren’t more valuable, given the name). Normally, I take issue with the ‘jump’ button being anything other than ‘A,’ but the epic floatiness of your jumps seem well-suited to pressing ‘Up.’ Each level has a mid-boss and a final boss, neither of which are too terribly difficult. Before every skirmish, I talk to Ken, the main character. I say, just remember to kick your way to freedom, Ken. It’s the only way to achieve complete success in all of life’s journeys or missions or… what have you. When he complies, he wins. Sometimes, though, Ken is rebellious and wants to do things his way. For example, to enter through a door, you have to press ‘A,’ ‘B’,’ and right on the directional pad… AT THE SAME TIME. What madness conceived such a configuration! Ken never listens when I ask him to go through a door, thus my time with Fist ended on level 3, where going through a door was pretty much required for progression. I’ll say this, though: should some wayward game magician ever figure out the secret to entering doors for this game, I’ll give him a proper fist bump and get right back into the kickin’. Fist of the North Star may not be what’s for breakfast, but it feels good. As any party goer will tell you, if it feels good, drink until you pass out… well, maybe you should just play Fist of the North Star instead.
Before level 3: B
After level 3: C-
The following two tabs change content below.