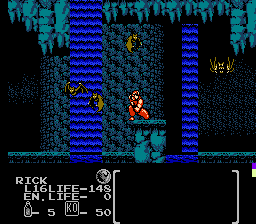 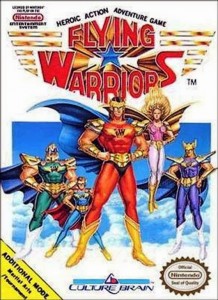 They worked long and hard on making each character unique… 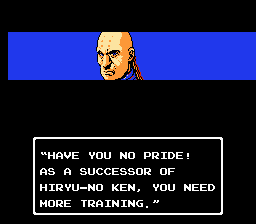 I swear to you, sir, I have no pride.

UPDATE: Here is the review, as it will appear in the upcoming book “The Nintendo Experience.”

Flying Warriors is the strangest non-linear beat-em-up/RPG/fighting game you’ll ever play. The game casts you as Rick Stalker, a Flying Warrior tasked with saving the world by fighting in tournaments. There are two types of play, battles and journeys. In the battles, you defend yourself and attack your opponent when prompted by an on-screen mark. These fights seem choreographed, but they make you feel awesome and are, hands down, the best part of Flying Warriors. While your combat skills initially seem formidable in the battle arenas, they mean nothing when faced against horrible hit detection in the journey sequences. Enemies come in clusters and rare is the battle where you don’t take any damage. Sometimes it’s difficult to know where the game wants you to go, and depending on the stage, you can get lost and/or die looking for the next boss/area. As with traditional RPGs, the more battles you fight, the more experience gained. Additional armor and weaponry are found along the way, as well as other Flying Warriors. Flying Warriors‘ depth is admirable, but the different genres don’t weave smoothly together and the game starts off hard, even on the Beginner setting. Still, if you’re willing to put in the time, there’s a lot to appreciate.

Good evening, all. Tonight I’m writing a review for Flying Warriors, which happens to be the sequel to my previously reviewed game, Flying Dragon: The Secret Scroll. I say that I’m writing a review… that’s a generous word. I’m writing a synopsis of what happened to me when I tried to play this game as I could not progress past the initial training sequence. First things first: Flying Warriors appears to be a huge improvement over Flying Dragon. The beginning cinematics are well done, and your “tournament” training begins right away. Instead of having to learn some awkward button combos, pressing “right” or “left” is your defense, and hitting “B” is your attack. Simple, right? Fantastic! Everybody loves simplicity, especially on a simple controller! For whatever reason, I can not beat the first guy, which happens to be your sensei. It’s not even that I can’t beat him. If I get hit too many times, he takes me back to training, even if my life hasn’t been completely depleted! What the heck, sensei! First you’re telling me I know Kung-Fu with the best of them (Eric Roberts?) but now I need more training?! Wow, I suck. That’s the thing, though… I know I’m not bad at video games. I’m not even bad at timing in most games, so I’m not sure if I’m just having an off night. Not being able to play this game saddens me. It hasn’t scored anything less than an 8 on GameFAQS, which usually is a good thing. It certainly seems better than Flying Dragon. Hopefully I can come back to this game at a later date and grade it properly. As it stands…