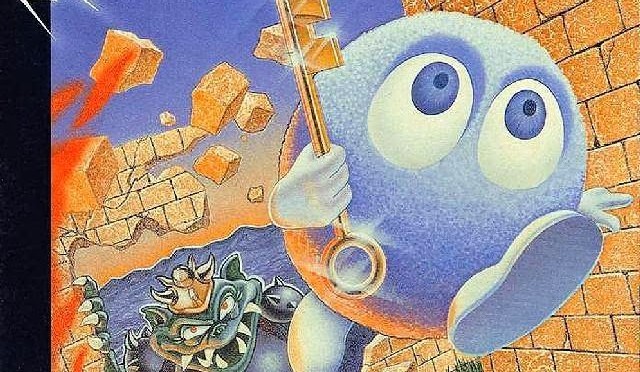 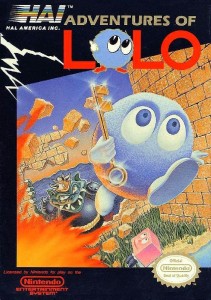 One of the many characters that needs an amazing comeback is Lolo. A new Adventures game would make a fantastic downloadable title. 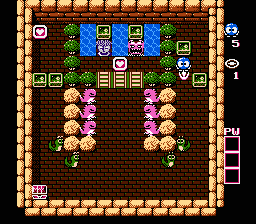 The calm before the storm.

I’ve enjoyed many a gaming experience on my NES, but very few games have charmed me like the Lolo series. I didn’t discover them until emulators like NESticle first broke onto the Internet, and from the first couple levels onward, I was hooked. Simply put, the Lolo titles are some of the most well-made puzzle games  for any console ever. They’re as playable today as they were when they were first released. They are absolute classics that can, and should, be appreciated by players of all ages.

You begin the game as Lolo, a rotund blue ball with a tail, who is out to rescue his beloved Princess Lala from the evil King Egger. The game starts off with an action packed cinema sequence, showing Lolo reaching for Lala as Egger pulls her away from him; those prone to seizures need not apply. Lolo then enters a large, ominous castle, ready for the challenges that lie ahead. If you had no idea what the game was about up to this point, you might think Lolo is some kind of hardcore action game, a la Castlevania or Ninja Gaiden, instead of a quaint, addictive puzzler. The goal for the game is to climb all ten floors, with five levels per floor. To do so, one must get all the hearts in each level and uncover the treasure chest without getting killed by the various enemies. You sometimes acquire power-ups like bubbles that will temporarily disable some enemies, and bridges which can help you get across water barriers 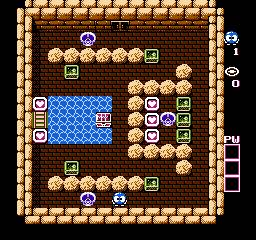 One of the simpler levels. Enjoy them while you can.

The enemies certainly lie at the heart of many of the puzzles. Some of the more common ones are medusas who will turn you to stone, unless you can cover their eyes (which can see you in all four directions); there are skulls who come to life and chase you after you acquire all the hearts; there are hopping lizard things that fall asleep the second they touch you, potentially obstructing your progress; pink dragons that wake up after you get all the hearts and shoot fireballs at you; and there are a few others too. King Egger does not want you to progress in any way. If you mess up in a stage, like trap yourself in a corner or accidentally use all your power-ups for the level, you can press Select, killing yourself and restarting the stage. It’s helpful, if a bit disturbing because Lolo screams like a slaughtered animal when he dies. Thankfully, the game has unlimited continues and pass words, should you get too frustrated. Often, the more difficult stages require some trial and error, which can result in many deaths for Lolo.

The only real issue I have with Lolo is how touchy the control can be. I could be moving a block to block a character from spewing projectiles at me, only to move it a little too far and get killed. Thankfully, this really only becomes an issue in the later levels, when every move you make and every power-up you obtain is a life and death matter. I learned how to become more careful, but even still, it can be a pain for the uninitiated.

The controls shouldn’t keep you from playing this incredible puzzle game, though. Not only is it one of the best series on the Nintendo, it’s one of the few titles I have a hard time putting down. Case in point: I had played and beaten this game prior to this review, but I conducted a refresher course to hone my skills and remind myself of Lolo‘s greatness. I didn’t stop until I had beaten the game several hours later. I don’t gush often. Heed my advice and play.