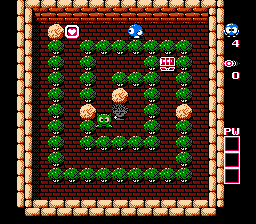 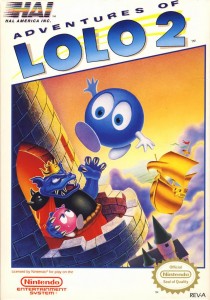 Lolo’s herped many a derp in his time. 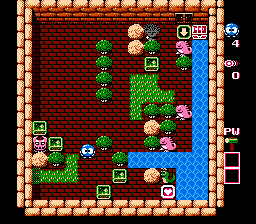 Haven’t made it this far… yet.

Remember Super Mario All-Stars? Sure, it was cool having all the Mario games with graphical upgrades, but the real treat was being able to play the “true” Super Mario Bros. 2. The Lost Levels looked and played like the original Super Mario Bros., but the level design was out of control. Miyamoto and gang really wanted to see how cruel they could be with this game. If you’re in the right mood, Lost Levels is painfully enjoyable, like removing some deep zits that have been plaguing you for weeks on end. Akin to Lost Levels, is Lolo 2. Lolo 2 makes the first game seem quaint, tame. Its puzzles are groin-grabbingly difficult, and you will walk away from your Nintendo desiring a stiff drink, but it’s still as addictive as ever.

Nothing’s changed from the first Lolo, as far as the basics go. Graphics, music, and gameplay are all pretty much the same; perhaps the animation is a little cleaner, but that’s about it. The only real issue I have with Lolo 2 is the amount of time it can take to solve some of these puzzles. Unless you’re an idiot-savant, you will be spending days, if not weeks, trying to figure out some of the more difficult levels.  Of course, there’s always GameFAQ’s, but then the pure awesomeness of having beaten a ridiculous level with your own brain power is taken away from you. Despite its rage-a-holic difficulty, Lolo 2 is a fantastic game and a worthy successor.