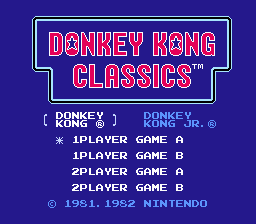 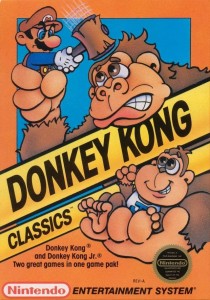 I’m pretty sure Mario would get squished if that hammer hit Donkey Kong’s head.

This screen is the only new addition.

JUST IN CASE:
Donkey Kong
Donkey Kong Jr.
If I’m not mistaken, Nintendo created the first game series compilation with Donkey Kong Classics. Of course, it’s not the first NES compilation (Super Mario Bros./Duck Hunt is the first, I believe), but it’s the first to compile two games of the same series. It was an awesome deal for its day, and it’s the only way to go if you want some old-school Donkey Kong action for your NES. Buying both Donkey Kong and Donkey Kong Jr cartridges and switching between them is just plain nutty, unless that’s how you get your jollies.
B-
RANDOM THOUGHTS
Despite putting both games on one cart, they still couldn’t add the missing factory level to the original Donkey Kong? Were you really that lazy, Nintendo?
How pissed would you be if you bought both the original games, then a mere two years later, Nintendo puts this economical compilation out for a lower price? Gamers became used to this compiling in later console generations (especially this current one), but this was non-existent at the time. Yeah, I would have yelled at the sky.
The following two tabs change content below.