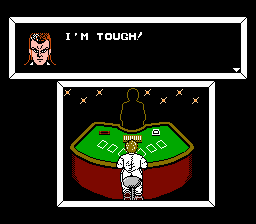 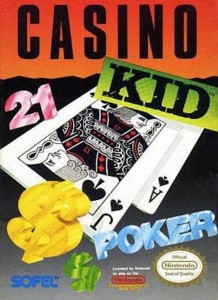 This cover is brought to you by the ’80s. 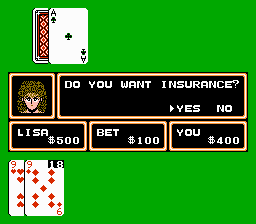 If Lisa asks if you want insurance, it’s because she’s about to cheat.

Any game that teaches gambling to children has to be a good thing, right? I mean, if congressmen aren’t up in arms about it, we as a society shouldn’t be worried. When it comes to video games, congressmen know what’s best for our children, which means Nintendo gambling games named Casino Kid are ok. For those parents who are still concerned about getting their child a used Nintendo game from the late ’80s, don’t worry: the Casino “Kid” in question is of legal age to gamble. He’s just a kid compared to all of the other old washed-up gambling addicts in the casino he frequents.

Compared to other gambling games like Blackjack or Caesar’s Palace, Casino Kid has some genuine personality. Instead of a nameless, faceless, invisible entity playing cards, you’re a teenage anime character fighting for his right to win a million dollars. Win a million dollars and go on to face “The Best, Most Mysterious Gambler Ever” and your right to become the Casino Man. You start off walking around a bustling casino, interacting with patrons, provocatively dressed waitresses, and poker and blackjack dealers. Find the appropriate dealers and face off against them in a battle of wits and cojones.

Many of the dealers will insult you unless you have a certain amount of money. Find the dealer with the lowest amount of cash on hand – Lisa for Blackjack and Johnny for Poker – and engage in a raging casino card battle with them. The only games on deck in this casino are blackjack and poker, so I hope you enjoy playing ridiculous amounts of both of those. Also, the computer cheats like a boss. I played several games of blackjack with Lisa and lost every time. It’s not like blackjack is a difficult game to comprehend, so why can’t I beat this bimbo even once? I was better at poker, which is amusing because I’m actually worse at poker in real life, but even Johnny had the occasional too-slick-for-rick move that had me reeling. Once you clean out the dealer, you move on to the next dealer with a higher starting bid. There is a password system so you don’t have to start over every time. Can you imagine playing thousands of poker games in a row, your winnings are up to $978,000 and lightning strikes your NES? Just remember, if you lose your temper in that situation, you have a gambling problem.

Why did Sofel think it was a good idea to produce Casino Kid  for the NES? When I was a kid in the early Nineties – an actual child, not an eighteen-year-old “kid” – I had no desire to gamble. I thought it would be fun to throw down a slot machine or two, but that was merely because I liked all the colors, lights, and change clinging together. I understand that parents also played the NES, and perhaps, in lieu of going to the casino, these games are a good way to get one’s virtual gambling fix. But simply by inserting the word “kid” into the title, Sofel is not making clear who their audience is supposed to be. Thank goodness these aren’t actual discussions we should be having in a public forum. They’re nigh unanswerable!