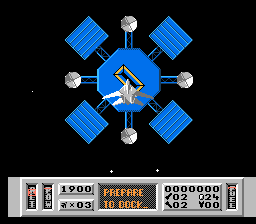 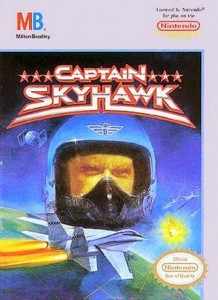 This will be the Captain’s last mission as he’s suffering from jaundice. Do him proud! 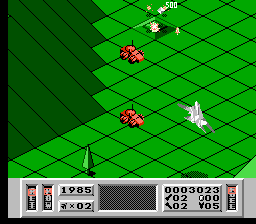 All aboard the Skyhawk Express, non-stop flight to pain.

Any classic video game that contains a ¾ degree isometric camera angle for its main point-of-view brings me to inward tears. It’s not that a good game can’t be made with such an angle; it’s that good games are often hampered by such an angle. I’d argue more and offer up examples and such, but it’s such a subjective point of contention that no one cares about anyway unless they’re a nerd. Anyways, if you couldn’t guess, this game contains such an angle. Surprisingly, it works for the arcadey flighty style that Captain Skyhawk possesses. Also, Rare made it on their lunch break, so double props for that.

Captain Skyhawk is eight missions of arcade flight action. You control the good captain in his signature gray fighter jet, and your only job is to destroy any and everything you see; unless that isn’t your only job. Sometimes you have to drop supplies into holes that open up on the ground. Such missions are frustrating because you have to be entirely too precise, and you can’t control the speed of your plane; nor can you turn around if you miss, which means, you will have to repeat the entire level over again. Fortunately, though, cargo missions are few and far between. It’s mostly fly and shoot action, which makes for a good half-hour to forty-five minute romp through the entire game.

But yeah, that camera angle… even though the game probably couldn’t have possessed a different angle, it can be a nuisance at times. You always have to watch your plane around the borders of the level and the raised up pyramid-esque hills amidst the level. If you clip your wings on them, prepare to explode. Also, I blame the camera for my many deaths-by-projectiles. Sometimes, it seems as though you’re passing right by the enemies’ projectiles, and you explode. Just as often, a projectile will come rip roaring towards you and it won’t connect. My strategy was to weave as often as possible and shoot as much as I could. I didn’t die as often, and I felt like more of a BA.

For the past week, my brain has felt smothered in fog. I can’t think clearly, I can’t write as concisely and epicly as I normally can, and I don’t have insurance so I can’t afford to go to the doctor. Truthfully, it’s the reason why I haven’t been updating this blog as often as I used to. SWEET! All of that has nothing to do with Captain Skyhawk, except to say that, I wish this review could have been written with a clearer mind; with a more piercing wit and a clearer explanation of the game mechanics. Look for a revision in the far, far future.