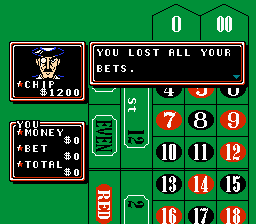 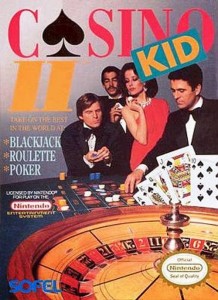 I’m not sure who the “kid” is supposed to be in this picture. Certainly not Alan Thicke on the right. 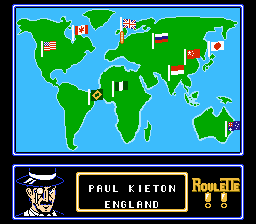 After all of my ranting about how Casino Kid is largely to blame for the ills of society – drinking, drugs, prostitution – among other disasters like tornadoes, crazy preachers and malnutrition in the third world, I looked forward to my review of Casino Kid 2. Would this sequel right the wrongs of its misinformed, inept older brother? Or would it continue down the same egotistical, vainglorious path not caring who or what it has to take out along the way? The truth is, yes.

Casino Kid 2 opens with you having beaten all of the so-called US Casino Champions. You’re sitting in your trademark white suit next to a roulette table, calmly tossing a hundred dollar chip in the air. There’s a woman on your lap and she’s drinking champagne. Next thing you know, you get a phone call: the World Casino Champions are none too thrilled about your newfound fame and glory, and invite you to take them on one by one. Having just acquired a million dollars, it’s of little expense to you to fly around the world several times, simply to beat a bunch of wackos who think they know it all about poker, blackjack, and roulette. Besides, if Casino Kid can conquer the States with his devil-may-care skill, the world shouldn’t be too hard to handle. If nothing else, he’ll still have his suit.

Casino Kid 2‘s aesthetic changes are welcome. Instead of wandering around in a casino trying to find the right person to play with, you’re taken to a world map that lists the different people you have to “battle.” They’re ranked in order of difficulty from one to three chips below their name and picture, so there’s no second guessing who you should play against first. Once you beat a character, they’re crossed off the map and you move on. It felt like Sofel wanted to have an interesting story without all of the casino clutter; designing the look of several different casinos around the world probably wouldn’t have been in their budget anyway.

While the game’s AI doesn’t feel as cheap as the original, the core game still plays like the first. For those who didn’t read my review of the first game, that means a whole lotta blackjack and poker. Poker is genuinely fun and feels fair, but once again, blackjack just feels cheap to me. If you ask for a hit above 13 or 14, you will almost always lose. Sofel actually added roulette into CK2, but roulette is such a game of cheap luck, I ended up never playing it; despite the fact that Chun-Li is hosting roulette in China. There’s no password system either in this game, so beware: if you lose all of your winnings, the game’s over. I suppose that makes logical sense: if Casino Kid lost all of his money, he couldn’t fly around the world. But c’mon Sofel, IT’S JUST A GAME!!!

If you liked blackjack and poker in the first Casino Kid, there’s nothing to prevent you from liking blackjack and poker (roulette sucks) in this game. All hyperbolic, asinine statements from the first paragraph aside, CK2 doesn’t completely right the wrongs of its predecessor, but I certainly enjoyed myself more than the first. Like many games on this blog, I question the need for a sequel to such a game as Casino Kid, but as long as there’s entertainment to be found, I can’t fault it too much. Except for North Korea. That is completely Casino Kid’s fault.