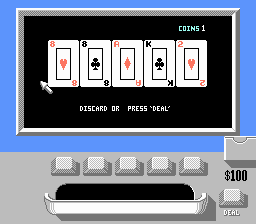 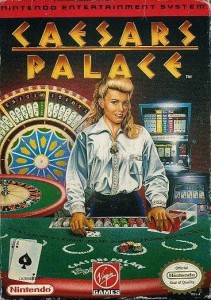 She had man hands… 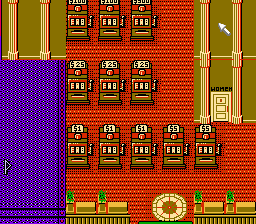 Here’s a confession: I’ve never been to Las Vegas. Here’s another confession: I really don’t care. Sure, I’m as big a fan of neon lights as anyone and I’ve flown over it several times during the night, and yeah, it looks pretty boss! The thought of blowing through a bunch of money in an hour doesn’t really set my loins on fire with excitement, though. Even if you stick to the dollar slot-machines (which you won’t because you’re in Vegas), you still have to think of food, shelter, and if you’re not gambling, drinks. Also, what if you win a bunch of money and the casino owners hire Celine Dion to kill you while you sleep? What then?! YOUR HEART WON’T GO ON, I CAN TELL YOU THAT!!!

With Caesar’s Palace for NES, the virtual gambling world is your oyster. No need to worry about running out of money, anorexic hit-women, or even fun! Caesar’s Palace accurately recreates, in loving 8-bit, what it may or may not mean to be in a casino titled Caesar’s Palace. The title screen flashes and a large building surrounded by glowing blue fountains appears. You know you’re in for some Siegfried and Roy action now! Continue on and a woman gives you a thousand dollars in chips before scooting you out to the casino. You have your pick of several games, many of which aren’t that fun: try a slot machine priced anywhere between one and five hundred dollars, spin the wheel of fortune or play roulette, hit up some video poker or blackjack, and most importantly, hit up the men’s or women’s restroom. For the latter, the game really doesn’t discriminate. It’s up to you to not be a dirtbag!

The way you wander around the casino floor is clunky. Instead of controlling an actual person (in 2011, a character creator would be included for this game), you control a cursor and “click” on the different areas where you want to go with the ‘A’ button. Once you get into a game, though, the cursor works out well. The problem is, four out of the five games are pretty boring and blackjack already received its own game which I reviewed some time last Month. I feel like my question with that game is the same with this one: why would you gamble virtual money if you can go waste your life savings down the road at an Indian casino? Blackjack at least has some tension (am I gonna get 21?!) but the rest of the games – especially the slot machines and roulette – are as banal as it comes. I can see why senior citizens go buckwild for days at casinos. I say, I’ll pretend my arm is a slot machine, and you can just keep feeding me dollars if you want to waste your money.

Once again, Nintendo has authorized a game that may or may not teach kids how to be old cranky curmudgeons, enjoy buffets, and blow their money accordingly. I’m not sure what it is with the fine folks in Japan and gambling games. Are they just trying to subversively undermine us as revenge for World War II? In the late 80s and early 90s, it was pretty obvious that they had conquered the electronics market with their affordably priced, but still well-built devices. Isn’t that enough, Japan? Do you need to take away our children from us too?!